They say ‘absence makes the heart grow fonder.’ A six-month hiatus due to the pandemic has certainly done nothing to diminish either Roberto de Souza’s enthusiasm or the ferocity of his fists.

Rizin 22 took place in the brand new PIA Arena tonight. Only one fight went the distance on a show that featured some emphatic finishes.

Having not competed in MMA since losing to Johnny Case at Rizin 19 in October, Souza provided the perfect conclusion to what was a high-octane return to action from both him and his employers.

De Souza’s opponent was Yusuke Yachi, a man who is no stranger to a memorable stoppage. The 30-year-old scored a soccer kick KO over Hiroto Uesako at Bellator Japan last December. 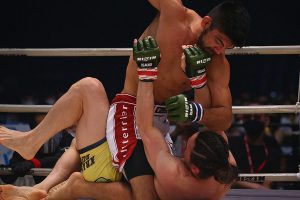 As another saying goes ‘sometimes, you’re the hammer. Sometimes you’re the nail.’ It soon transpired that today Yachi would be the latter.

De Souza scored an early takedown in the corner. The Brazilian then exploded with a bombardment of ground and pound that simply overwhelmed Yachi.

With de Souza in full mount he was able to throw bombs at will. He threatened to take Yachi’s back and sink in a choke on a couple of occasions but soon resumed laying down the punishment.

After countless blows with no reply, the referee called time on what was a statement return to form for the Brazilian lightweight who was stopped in the first round by Johnny Case at Rizin 19. De Souza improves to 10-1 while Yachi drops to 21-10, a reversal of fortunes after his statement win last year. 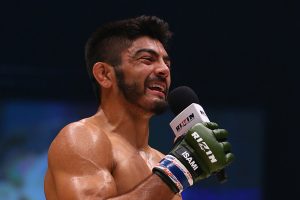 The main event was preceded by another dominant display. This one coming from former champion Ayaka Hamasaki as she locked in a beautiful kimura to finish Tomo Maesawa in the second round of their super atomweight fight.

The 19-3 veteran was coming off of a rare loss in her last fight, having dropped a decision to Seo Hee Ham at Rizin 20 in December. She ensured there would be no repeat of that disappointment here.

Hamasaki cracked her opponent with some big shots in the first round, landing a big straight left and a delightful right uppercut to the chin of Maesawa. While her striking looked great in that opening round, it was her sensational grappling that got the job done in the second.

Having secured the takedown with relative ease Hamasaki (20-3) worked from half-guard into a north-south position. From there she was able to lock in a kimura against Maesawa (7-7) scoring a seventh career submission victory. 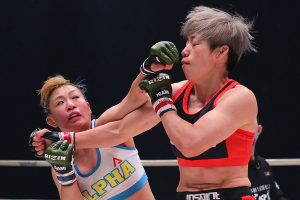 There was another one-sided female fight before that as super atomweight Kanna Asakura delivered a first-round mauling against Mizuki Furuse. She sprawled on a half-hearted takedown attempt before taking the back and landing a hailstorm of leather.

After she dropped several, clean and powerful blows Furuse was left turtled up and waiting for the inevitable. The referee stopped the fight with Asakura moving up to 17-4 while her opponent drops to 13-11. 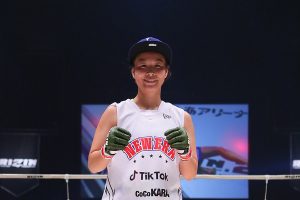 Fast finishes had certainly become a theme of the afternoon with bantamweight Naoki Inoue (14-2) dispatching Shooto Watanabe (20-5-6) with a first-round rear naked choke.

In a day filled with stand-out performances, the crowd were treated to a memorable showing from Nakada Yoshinari in his catchweight kickboxing bout against Yuushin.

Nakada was making his kickboxing debut and did so in style. The Muay Thai champion was much too good for Yuushin, repeatedly tossing him to the canvas in the opening round and landing numerous kicks to the body.

The second round saw Nakada use a combination of vicious elbows interspersed with an overhand right as he sealed the finish.