Two of the biggest names in Muay Thai will meet in Songkla on Friday night.

Seksan Or Kwanmuang faces off against Rodtang Jitmuangnon in a match that has got the whole Muay Thai world excited. Thailand’s fight scene has seen a common trend in recent years, for upcountry mega shows, giving people a chance to see close up some of the biggest names in the sport without making the long trek to Bangkok.

Friday sees the latest mega show in Singnakon district of Songkla province. The card is stacked with big names, but one fight in particular stands out as it pits two of the most ferocious warriors the sport has seen in recent years together.

Seksan and Rodtang are both known for their uncompromising, walk forward styles and the fight is a dream match for fans of non-stop aggressive action. The former is known as ‘the man who yields to no-one’ while the latter goes by the nickname ‘Ironman’.

This would be a fight that would draw huge crowds in either of Bangkok’s main stadiums, with both being at the forefront of the current Muay Thai scene. However as Seksan and Rodtang are signed with rival promoters it would not have been a straightforward matchup to make. 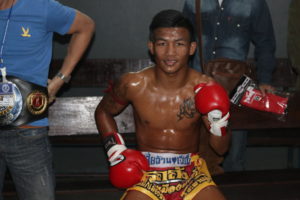 With both fighters making big names for themselves internationally now, it isn’t just the Thai fight fans who are excited. On social media there has been a surge in interest for the fight and Seksan and Rodtang will be looking to strengthen their names on the foreign fight circuits.

This means there is more at stake than just pride when the two face off in the south of Thailand, in a bout that is set for 134lbs. Seksan is coming into the fight on the back of a tough loss in the semi-finals of the Rise World Series 2019 61kgs tournament.

By contrast Rodtang is coming on the back of a strong showing on ONE: ‘Dawn of Heroes’ in Manila, just two weeks ago. He dethroned England’s Jonathan Haggerty to win the flyweight title which had previously been the property of Sam-A Gaiyanghadao. 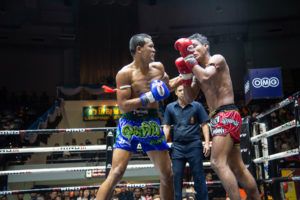 Meanwhile Seksan is coming off a decision loss to Shiratori Taijuu, albeit fighting in Japan under kickboxing rules. The biggest point of contention going into the match was the weight, with Rodtang usually fighting a little lighter.

Eventually a weight of 134lbs was agreed on although Seksan is likely to be significantly heavier on fight night. Rodtang has been competing at flyweight for ONE Championship, meaning his walking weight should be around 135lbs.

There are several bouts on the card which would sell out any stadium in Bangkok as some of the biggest names in the sport go head to head. Former ‘Fighter of the Year’ winners like Sangmanee Sathienmuaythai and Panpayak Jitmuangnon will be in action.