Rodtang Jitmuangnon and Seksan Or Kwanmuang went to war at Rajadamnern on Thursday night. The recent meeting between the two in Songkla had been a disappointment but in Bangkok it was a very different story

In the opening round both men exchanged hard low kicks, with Rodtang using punching combinations to the head and body to set them up.  In the second they traded heavy leather, Seksan seemed to land a few but his opponent just dropped his hands and smiled.

Rodtang came out aggressively in the third and fired off multiple punches but Seksan kept his guard up and weathered the storm before attacking with a series of long knees. 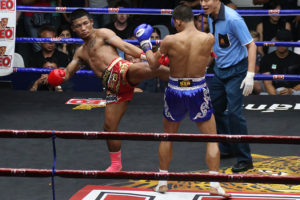 The fourth round was an explosive affair with both men trading punches at close quarters but it was Rodtang who did the damage. Seksan stayed on his feet and kept coming forwards but he was clearly rocked.

It gave the reigning ONE Championship flyweight champion a clear cut lead going into the final round. Seksan looked to catch him with something but was low on energy and ideas, at one stage Rodtang dropped his hands and ducked and dived in the corner leaving his opponent flailing at fresh air.

No sooner had the fight finished then it was announced both men would receive a $50,000 baht bonus in recognition of their efforts. The decision itself was a foregone conclusion with all three judges seeing the contest 49-47 in favour of Rodtang. In the co-main event Yodpanomrung looked like he was going to overwhelm Sangmanee with straight punches and long knees. He gave his opponent no breathing space at all and the strategy seemed to be paying dividends.

But in the third Sangmanee ducked under a punch and rugby tackled him to the floor, after that Yodpanomrung found himself chasing shadows. The former ‘Fighter of the Year’ was far too elusive and succeeded in either evading his opponent or tying him up to see out the fight and claim a clear decision win.

The bout between Kiewpayak Jitmuangnon and Chanasuk Kor Kampanart was waved off after the former landed an illegal knee in the second round.