Last Saturday saw the biggest Muay Thai card of the year take place at the Chang International Circuit in Buriram.

Both fighters came into the contest on strong form, with Bohic having beaten Yodpanomrung Jitmuangnon by decision and scored stoppage wins over Chamuakthong Fightermuaythai and Manachai Yokkao gym in his last three fights.

Sangmanee came into the match after beating Yodpanomrung, Yodlekpetch Or Achariya and Tawanchai PKSaenchaigym in his last three bouts. The biggest concern for Sangmanee going into the bout was the size of Bohic, with the fight made at 141lbs. As soon as they stepped into the ring there was a notable difference in in size and height in the French fighter’s favour.

The fight started slowly as is the norm in Thailand, but it was soon apparent that it would be a frustrating night for the young French warrior. Sangmanee’s timing was sublime throughout, as he hammered the sides of Bohic with fast left body kicks and caught him repeatedly with hard straight lefts.

Bohic pushed forward looking to make a fight of it, but struggled to find any kind of rhythm and looked unable to deal with Sangmanee’s southpaw stance. Midway through the fight Sangmanee started to aim his kicks a little higher, crashing them into the right arm of Bohic. It brought back memories of the time Attachai Por Samranchai nullified the attacks of Anuwat Kaewsamrit with kicks to the arm in a famous southpaw vs. orthodox clash from a previous era.

Bohic tried to attack the legs of Sangmanee and got through with a few punches, but nothing troubled the Thai who cruised through the final round to take a clear, comfortable decision win. There was more fireworks in the pre main event when Gulabdam SorJorPiekUThai faced Neunglanlek Jitmuangnon for the fourth time. The former had scored two decision wins while the latter registered a head kick KO in their most recent meeting.

The fight started slowly in the opening round. In round two Neunglanlek started to look sharp, as he landed a hard body kick and followed it with a vicious elbow.

Towards the end of the round Neunglanlek landed with a hard elbow, bloodying the nose of Gulabdam and followed in with a barrage of hard shots. 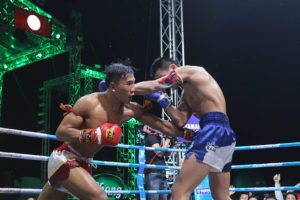 In the third both exploded to life, with the two men trading heavy shots in some thrilling exchanges. It looked clear though that Neunglanlek had the edge in power and near the end of the round he opened up with a barrage of knees that had Gulabdam hurt.

The referee stepped in to give him an eight count, before Neunglanlek tried to finish him off, but Gulabdam was saved by the bell.

Gulabdam came out like a man possessed in the fourth, rocking back the head of Neunglanlek with some heavy punches and looking like he may be able to turn the fight around.

It was short lived though and Neunglanlek was soon back on top, punishing the body of Gulabdam with knees.

Gulabdam kept trying to get though with hard punches, but they were coming in single shots by this point. Just before the end of the round, Neunglanlek landed with two vicious knees that folded over Gulabdam. The referee stepped in to save him from further punishment. 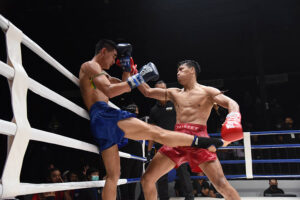