Saygid Arslanaliev and Timofey Nastyukhin went to war at the Singapore Indoor Stadium tonight. The two lightweights traded leather in an absolute bloodbath.

Both men were bleeding heavily but it was Arslanaliev who did the most damage, finishing the fight in the second round:

It was the second time Arslanaliev had stopped Nastyukhin and after some health issues he appeared to be back to his best at ONE: ‘Winter Warriors’. Both men will surely need some time to recover after this all out war.

Nastyukhin had drawn first blood, literally. He busted Arslanaliev’s nose open early in the opening round but the Turkish based fighter responded by inflicting a nasty looking facial wound of his own.

Arslanaliev would ultimately prevail and when he is ready to return he should be close to a title shot. For Nastyukhin it is back to the drawing board after a second successive loss but fans will be eager to watch either man again after this ‘fight of the year’ contender. 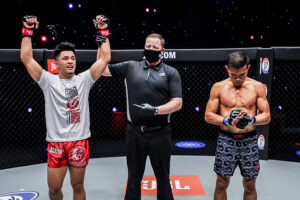