Zeus FC 2 was held at the Cheongju Indoor Gymnasium in South Korea on Sunday. With the vision of providing every fighter an opportunity to stack up experience and move on to the global stage, individuals representing more than fifteen camps gathered together to show their skills.

The headliner was scheduled as a strawweight title fight between Kim Gyo-Rin and Seo Ye-Dam. Unfortunately, Kim was unable to make weight and the organization decided to shift it to catchweight affair.

With Kim having complications with her weight cut the day before, Seo seemed to have a solid game plan in place to take out the young prospect. A lot of the time in the clinch to deplete the gas tank and knees to the body proved to be the determining factor. 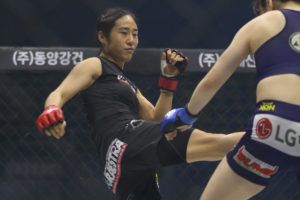 A large portion of the first round had them jockeying for position. Even though Kim did look crisper in the striking department, not much time was spent fighting from distance.

With about a minute left, Seo clinched up after an exchange and connected with over ten solid knees to the midsection. Kim was able to reverse and press Seo against the cage to ride out the rest of the round without taking any more damage.

After receiving two vicious kicks to the body to open up the second, Kim clinched and put her opponent on the fence. During another barrage of knees, Kim winces in pain but got out of trouble by running all the way across the cage.

The 17-year-old went for broke and threw wild hooks, allowing Seo to clinch and take the fight to the ground. From mount to locking up the neck with relative ease, Seo obtained the submission finish. 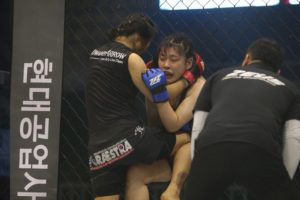 Three in a row

The 27-year-old Seo now has won three in a row via rear-naked choke and moves her record to 5-2. Kim loses for the first time and is 1-1.

The fight of the night was a back and forth battle between Shark and Park Moon-Ho. Although every round was evenly contested and action-packed, the opening frame captured the attention of many people in the stands.

Shark wasted no time from the opening bell by rushing forward which had Park back peddling and trying to clinch. During a few of the high pace flurries, Park was visibly rattled by the combinations and had to dig deep to survive.

After landing some solid shots and completing some throws, Shark was dropped while being overly aggressive with a powerful left hand. The Zombie MMA product was able to slowly slide into mount and transition into an armbar yet his opponent spun around on top to escape any danger.

The rest of the fight was a grueling slugfest on the feet with both men landing at a consistent rate. With the split decision victory, Shark improves his record to 2-0 while Park drops to 3-2.