Seung Woo Choi will make his long-awaited return to action at UFC Vegas 18. The Korean’s last showing came over a year ago.

Since then, he’s had one bout cancelled bout and two changes of opponent leading up to his comeback this weekend. With both Steven Peterson and Collin Anglin pulling out in recent weeks, Choi is now set to take on Youssef Zalal this Saturday (local time) in Las Vegas.

He is coming off a win over Suman Mokhtarian at UFC Busan in 2019 and the Korean says he has made the most of his time away from the octagon,

“It’s been a while since my last fight. I think the time off has been meaningful to me because I’ve gotten stronger. I want to show how strong I have become in this fight. Since the last competition, I have trained and explored ways to improve to become the best version of myself. I have physically and mentally been preparing for a fight.” 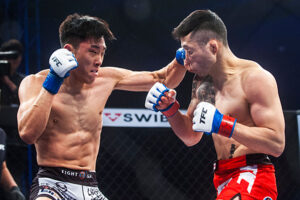 The unanimous decision win over Mokhtarian was an important milestone in Seung’s career,

“Looking back at this win it was nice to get the victory in front of my family and supporters at my home country UFC event and I was so happy because I was desperate for my first win in the UFC. I believe this is just a start and all I have left to do now is to show a better version of myself.”

Despite so much uncertainty in the lead-up to his comeback, Seung is sure of sealing a positive outcome,

“My opponent changed twice” he said, “But nothing changes, I just have to pay attention to whatever I need to do and focus. Strategies and tactics would probably be modified, but it’s okay as I’ll be facing an opponent I was matched with last year. I’m more confident than ever, and I’ll definitely win.” At 28-years-old, Seung should be coming into his prime and the Korean is adamant he has what it takes to be a UFC champion,

“My goal is, of course, to become the featherweight division champion. For now, I want to put my best effort to win any given opportunities and become stronger so that I can become the champion by competing with top ten fighters in the future.”

Before signing with the UFC, the talented featherweight fought across Asia and was a champion at 145lb in Top FC. He also fought for Kunlun, Art of War and won a bronze medal at the Muay Thai World Championships in 2010.

He certainly has the pedigree to make a splash in the division and he’s hoping to deliver some big performances this year. Looking towards his goals moving forward, he said,

“2021 is all about winning my fights with an impact. I want to be stronger so that I can earn respect and become an influential fighter.”