Suman Mokhtarian is always up for a challenge. The Iranian-born, Australian based fighter says he thrives in the face of adversity.

After a year sitting on the sidelines he will return to action this Saturday against Seung Woo Choi at UFC Busan. The 27 year old has no qualms about traveling to South Korea to take on a local,

“I want to do my best, but not because he is fighting in front of his countrymen and will have the crowd behind him, but because he is a test for me,” Mokhtarian explained.

Mokhtarian is excited about the prospect of traveling into new territory and putting his skill set to the test,

“This is a massive step forward in my career. When I signed with the UFC last year I felt like something in my life was about to change. I am not letting this wonderful opportunity go just like that (because) I fought to be here,” he said. 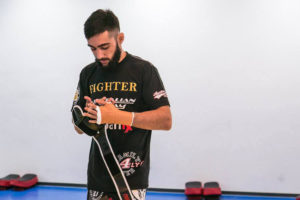 He is hailed as one of the pioneers of the growing MMA scene in ‘The Land Down Under’ having founded Australian Top Team alongside his older brother, Ashkan Mokhtarian, who also happens to be a UFC veteran.

The younger sibling jump started his professional stint with eight straight victories. This impressive records earned Mokhtarian a spot on the 27th season of ‘The Ultimate Fighter’ reality television show that featured undefeated prospects and was broadcast in 2018.

Though he fell short to Ricky Steele in the quarter-final round, Mokhtarian still received a multi-fight deal with the UFC a few months later and made his promotional debut when the organization held a card in Adelaide.

Unfortunately, Mokhtarian suffered his first career defeat at the hands of Sodiq Yusuff. The first-round technical knockout result remains fervently debated to this day with many people believing it was a premature stoppage.

Mokhtarian’s maiden UFC voyage might not have gone according to plan. But he sees Saturday’s fight as the perfect opportunity to prove that he belongs by registering a more impressive result,

“Like me, he (Choi) is young and talented. He will be a good opponent to share the cage with. I am expecting the best outcome in this fight,” he said. Choi owns a 7-3 record but is coming off back to back defeats inside the octagon. He will have the fans in Busan behind him but Mokhtarian says this won’t faze him,

“Of course, the Korean people will support their fighter, but I know that exactly the same thing would happen if we fought in my hometown. It’s only fair. Whatever the audience is going to throw at me, I am ready,” he said.

Mokhtarian says he is used to the audience’s ire having traveled to China and Singapore on several occasions to take on local favorites,

“I’m not new to this kind of situation. Like in any other sport, focus is always the key,” he said.

Mokhtarian knows what it feels like to have his hand raised on foreign soil and hopes to do the same thing on Saturday,

“Nobody is unbeatable, and anything is possible. I will do my best.”