Seung Woo Choi is a fighter looking to make up for lost time after missing all of 2020. The Korean featherweight enhanced his burgeoning reputation with a unanimous decision victory against Youssef Zalal at UFC Vegas 18.

This was a first win for ‘Sting’ since beating Suman Mokhtarian over a year ago at UFC Busan, and he now has back-to-back victories having lost his first two fights for the promotion. The 28-year-old sought to lead the dance and applied pressure from the outset.

Zalal, meanwhile, came into this fight on the back of a loss to Ilia Topuria at UFC Fight Island 5 and spent much of the opening exchanges circling on the outside and utilizing the jab. ‘The Moroccan Devil’ then looked to change levels and take his opponent down, but Choi was able to defend and launched some solid shoulder strikes in the clinch.

When they returned to the center of the Octagon, Choi began to put his combinations together with more frequency and finished the round with a takedown. The Korean continued to let his hands go at the start of the second round before clinching his opponent against the fence once more. 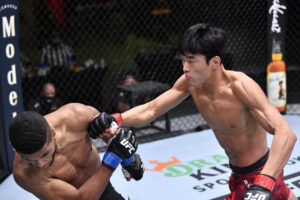 Zalal was able to reverse the position and went for a single leg, but Choi defended well. He again looked for a takedown but to no avail as the Korean increased his output, landing slick combinations on the feet.

In the third, Zalal had his best moment of the fight as he finally secured a takedown and tried to lock up a guillotine. He then transitioned to a triangle, but Choi’s defense was solid.

Zalal scored another takedown but Choi stubbornly got back to his feet. Overall, the superior striking as well as the pressure game from the Korean was telling.

Former Rizin bantamweight champion, Manel Kape may well have a sense of regret when he looks back at his UFC debut against Alejando Pantoja. ‘Prodigio’s’ performance showed class and a degree of comfort performing at this level but his opponent was the busier fighter and took the decision win.

The Brazilian bared his intentions early with a clean one-two and an accumulation of leg kicks. Kape’s footwork and movement was impressive, and while he did land some good shots he was throwing mostly singles and counters.

Later in the round the Angolan attempted to switch things up with a cartwheel kick but ended up on his back and ate a big right hand for his trouble. 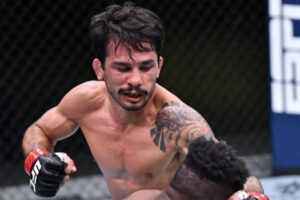 Pantoja found plenty of joy throwing body kicks in the second. The additional volume coming from the TUF 24 semi-finalist was palpable, although Kape did produce a lovely slip and counter as he ripped a shot to the body with the right hand.

Kape’s corner could be heard asking him to step up his output and he did seek to oblige towards the end of the round as he stepped up the pace and shot for two takedowns.

The third round saw two strong straight lefts from Kape, but just as he landed a leg kick, Pantoja responded with a stout left cross as he continued to march ahead in terms of significant strikes.

‘The cannibal’ maintained his volume throughout, landing with a head kick at the end of a three-punch combination to provide one of the highlights of the fight. With another outside calf kick coming from Pantoja, Kape did show flashes of brilliance with his lightning-fast hands but it was too little, too late.

The AKA Thailand man went for a takedown late on and was met with a knee on the break in what was an impressive overall performance from Pantoja, who takes his record to 23-5 and propels himself into the flyweight title conversation.

Alexander Volkov put on a masterful display in the main event against former Strikeforce, K-1 and Dream champion, Alistair Overeem (47-19-0, 1NC.) The Russian pieced the Dutchman apart and left him bloody nosed in the first before picking up where he left off in the second.

This was as good a striking display as we’d seen from Volkov as he connected with a lovely right-left combination to put Overeem down as he sealed the biggest win of his career. The win extends his record to 33-8 and will propel him into the top five of the heavyweight division.

Overeem  drops to 47-19-0-1 and his dream of challenging for the UFC heavyweight title appears to be over.