Filipino mixed martial artists will be putting their differences aside for nearly two weeks with the objective of bolstering the Philippines’ campaign to dominate the medal tally at the 2019 SEA Games.

Mark Sangiao will be coaching the kickboxing team and bringing five of his Team Lakay pupils.

The MMA fighters from Team Lakay on the team include Gina Iniong, Jerry Olsim and Jean Claude Saclag. Iniong is set to vie in the women’s 55kgs category, while Olsim and Saclag will try to hoist the Philippine flag aloft in the men’s 69kgs and 63kgs brackets respectively.

Known by the moniker ‘Conviction’ due to her hard-hitting style inside the cage, Iniong is recognized as one of the pioneers of women’s MMA in the Philippines, strutting her wares in promotions such as Pacific Xtreme Combat and ONE Championship.

On the other hand, Olsim is one of the many top prospects in ONE Championship’s developmental league, Rich Franklin’s ONE Warrior Series. Meanwhile, Saclag is an Asian Games silver medalist who made his professional MMA debut this past May in a losing effort against Japan’s Ryo Okada at Shooto 30th Anniversary Tour in Tokyo. 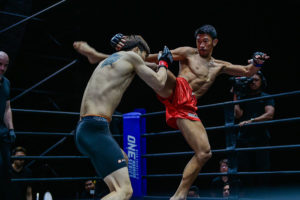 Also on the kickboxing team are MMA veterans Rex De Lara and Ruel Catalan. Sangiao is not known as a kickboxing coach but is confident he will be able to help his team fulfill their potential at the bi-annual tournament,

“I’ve separated their training from MMA. It wasn’t difficult to do since my first art is boxing even before I got into wushu. I’ve created a program for the team. What we need to do now is find out the level of competition in the SEA Games,” he said.

The main problem for Sangiao at the moment is scouting as he just only just received the list of their opponents, prompting him to do some last minute research,

“We don’t know for sure how good they are, so we’re doing our research. So far what we know is Vietnam is quite good while this one is pretty much basic for Thailand,” he stated.

As for the odds of capturing a medal, Sangiao dropped one name in particular who stands out the most from his talented pool of kickboxers,

“I see potential gold medalists, but I just can’t predict how many. We have to consider that our athletes like Jean Claude Saclag came from wushu where he is a world champion,” he shared.

“Saclag has a huge chance of bagging gold. I also see others capable of winning, but it is just hard to predict,” Sangiao added

Sangiao will also be sending some of his up-and-coming stalwarts to represent the Philippines at the SEA Games. Islay Erika Bomogao and Alexis Badol Mayag-as will don the nation’s colors in Muay Thai.

While Sangiao refused to guarantee the number of gold medals that his squad can claim for the Philippines, he vowed that his fighters will be out to give their all, especially since the SEA Games will be held on home soil.

“The nation can expect that our athletes will compete with all their hearts. We carry the entire country on our shoulders, so we’ve been working hard since day one of our training,” he promised. 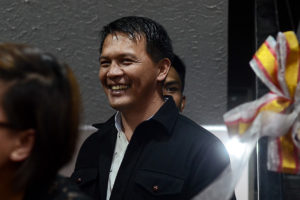 Catalan, an Iloilo City native who last won a wushu gold medal at the SEA Games in 2005, has once again made himself available to represent the country, this time in the sport of sambo.

After falling short to Team Lakay’s Joshua Pacio for the ONE Championship strawweight belt this past November, Catalan targets a podium finish in sambo to redeem himself.

“Make no mistake about it, we won’t be coming in just to compete. We are coming to win a gold medal for the Philippines,” Catalan said

“What’s important is to take home the gold for my country, which will only give me more confidence when I go back to MMA next year.”

Catalan will be teaming up with other MMA practitioners such as Fil-Am sensation Mark Striegl, Jerry Legaspi and Patrick Dos Santos. Sambo will make its SEA Games debut on December 5 at the Angeles University Foundation gymnasium, which is a three-hour drive outside the metropolis.

Last week’s URCC: ‘Retribution’ card was unexpectedly cancelled at the last minute. Promoter Alvin Aguilar announces that this was because of the SEA Games,

“All of our athletes are homegrown. They’re all potential gold medalists. How they perform will depend on their mindset on the day of competition. They’ve all trained so hard and have dealt with so much adversity. I am happy that we can all set aside our differences for the greater glory of our country,” he said.