Shamil Zavurov grinds out A Sol Kwon at Road FC 56

Road FC 56 was the organization’s first show in the southern city of Yeosu but to the disappointment of many, the lead up was much more exciting than the actual main event between A Sol Kwon and Shamil Zavurov.

With a heavy wrestling base, Zavurov took the easy route to victory by taking Kwon to the mat in every round and keeping the top position throughout.

The exchanges in the striking department were virtually non existent which didn’t exactly play to Kwon’s strengths. The Dagestani neutralized any stand up attacks and put Kwon on his back repeatedly.

From inside the guard, Zavurov played it safe and pitter-pattered Kwon with punches, not taking any risks. The Korean was glued to the canvas and relied on the referee to stand up the fight, and even when he obliged the former champion could not capitalize by landing any strikes.

This all resulted in Zavurov (36-6-1) earning his second straight unanimous decision and possibly another shot at current lightweight champion Mansour Barnaoui. Kwon (21-12), on the flip side, loses for the second time in succession. 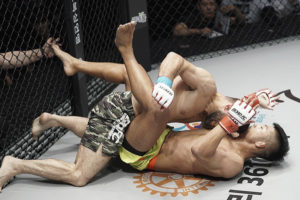 The reigning bantamweight champion Kim Min Woo stepped into the co-main event with a broken right hand but it did not deter him from standing in front of Jang Ik Hwan to play a technical battle on the feet. Kim used the jab to perfection and surgically carved up his opponent, leading to a clean sweep on the judges’ scorecards.

Systematically utilizing the straight left, Kim bruised and battered Jang. Sporadically mixing in the right hand and the low calf kick, the title challenger was flustered and limited on his attacks. Each round Kim did damage to a section of the face, leaving Jang unrecognizable at the end.

Even though Kim appeared to have won every round, the judges scored it a draw, meaning an extra round was required after the regulated three. The champion continued with the onslaught until the final bell to claim a clear cut decision win.

Jang (8-3) has only fallen to top competition such as Kai Kara France and Alateng, both currently on the UFC roster, so this should not be the last time we see him in the cage chasing a title.

On the other hand, Kim (10-2) has solidified himself as the best bantamweight in Korea and a trip over to Rizin could be in his future plans. But before signing up to fight, he will need to address the injuries to both his hands, something he revealed in the post-fight interview. 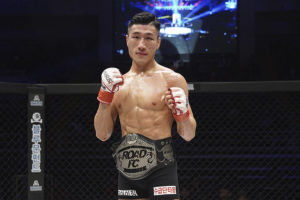 Shiguemoto (13-3-1) capitalized on a Choi misstep and began reigning down hard punches. Scrambling for his life, Choi finally was able to get upright after absorbing heavy shots yet one last shot put him to sleep right before the thirty-second mark.

Being finished so fast means Choi (4-4) remains inconsistent and goes to the back of the line in the middleweight ranks. Meanwhile, former Heat middleweight champion Shiguemoto prolongs his win streak to eight and instantly throws his name onto the list of potential title challengers.

Coming off the first loss of his career, Hwang In Su rebounded strongly by viciously knocking out veteran Kim Eun Soo. This impressive showing puts Hwang’s record at 5-1 and back into title contention, while Kim loses his third in a row over the past four years and drops to 7-6 overall.