Shannon Wiratchai returned to winning ways with a split decision win over Fabio Pinca at ONE: ‘No Surrender’ Part III in Bangkok tonight.

Making a return to featherweight, the local fighter secured what might be the most important win of his career as he snapped a four-fight losing streak.

Pinca had never having fought MMA but there were high expectations ahead of his debut. He came into this contest with a reputation as being one of the top Muay Thai practitioners in the world.

Wiratchai certainly rose to the occasion. He looked calm and confident in the early exchanges of a battle that took place almost exclusively on the feet. 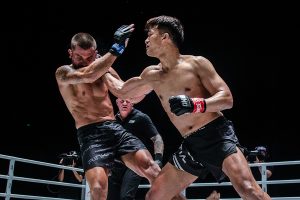 And he might have even got the finish when he blocked a Pinca head kick with 10 seconds left in the first round. The Frenchman lost his footing and Wiratchai descended, landing a flurry of heavy ground and pound only for his opponent to be saved by the bell.

Halfway through the second round came another big moment for the Thai. As Pinca evaded a head kick he was swiftly met with a spinning backfist that dropped him to the canvas.

Again, Wiratchai was on him in a flash with an onslaught of shots on the ground. Pinca then ate a knee and yet more punches as he scrambled to his feet. 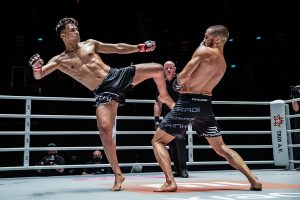 Too little, too late

There were certainly elements of the elite-level striking fans have come to expect from Pinca but he wasn’t able to let his hands go with enough frequency to convince the judges.

His leg kicks started to do some visible damage on the rear leg of Wiratchai and they did visibly affect the Thai in the third round. It would be too little, too late though as two of the three judges awarded the local star his first win since 2018.

Wiratchai moves up to 10-6-0-1 and snaps his four fight losing skid. Pinca drops to 0-1 after coming up short on his pro MMA debut. 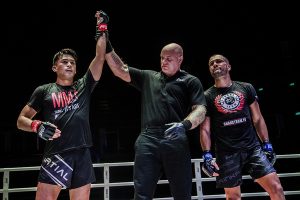 In the other MMA bout of the evening Ben Royle scored the first TKO win of his career as he finished Quitin Thomas in the third round.

The Englishman, who has a black belt in Brazilian Jiu-Jitsu, showed superior striking and used his jab well to set up some big left hands in the first round. In the second, he went to work on his fellow southpaw as Thomas was left wobbling under the strain of unchecked leg kicks.

With Thomas forced to switch stances and struggling in the third stanza, Royle saw his opening and cracked a beautiful three punch combination. The left hand had come up trumps again with Thomas left flat on his back.

The win takes Royle’s record to 5-1 on his ONE debut. Meanwhile Thomas drops to 1-1

The main event certainly provided the biggest highlight of the night. In the second semi-final of the ONE Super Series Bantamweight Grand Prix, Kulabdam SorJorPiekUthai produced an absolute stunner of a left cross that landed plum on the chin of Sangmanee Sathiangym to knock him out cold.