Sangmanee Sathiangym gets the opportunity to justify the hype surrounding him when he takes on tough Japanese warrior Kenta Yamada at ONE: ‘A New Tomorrow’ in Bangkok on Friday

Sangmanee’s promotional debut did not quite live up to expectations as he scored a decision win over Moroccan fighter Azize Hlali at ONE: ‘Masters of Fate’. The multiple time Muay Thai champion feels he did not get the opportunity to show what he is truly capable of,

“It was a very frustrating fight for me. My opponent came in over 2kgs more than the agreed weight and was very difficult to fight. He ran away for the whole fight so I just had to do the best to score and get the win but it was hard when he didn’t want to come forward and fight,” he said.

Sangmanee has a strong and supportive team with his parents always keeping a close eye on him. His father, a former fighter himself, has been a guiding light in his career from day one when he started out on small shows in Thailand’s North East. 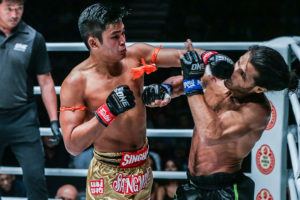 Sangmanee’s father has studied Yamada already and believes his son will be able to shine against a different type of opponent,

“We have watched his fights with Petchmorrakot and Muangthai and he looks perfect for us to fight. He mainly relies on his punches and can be a little awkward but he loves to come forward all the time which suits Sangmanee. We will work on throwing everything in the fight, but the main focus will come from Sangmanee’s left kicks and punches.”

Sangmanee spoke of wearing the MMA gloves to fight which has been a strong talking point online recently,

“There is more pressure when wearing these gloves as any mistake could cost you the fight. It is harder to block and soak up punch attacks on your arms as they are not as wide. I focus more on defence against punches when training and being careful to not make myself too open to punch counters when I attack. I don’t mind wearing them though as there is more chance I can hurt or get the KO against my opponent.” 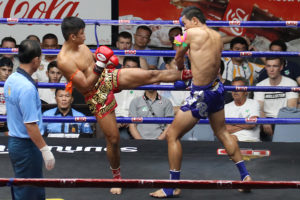 Sangmanee has already noticed big differences between fighting in the Bangkok stadiums and being on ONE Championship cards. He is looking forward to showcasing his skills at the Impact Arena,

“It’s much nicer to fight on ONE without any pressure from the gamblers and not having to worry about the odds of the fight. This means I can show all my skills as ONE score the fights on the boxers weapons used and score the fights as a sport. I have trained very hard and will go into the fight very confident, as I know I will have the whole crowd behind me.”

Although still only 22 years of age Sangmanee has amassed well over 100 fights on his record and is a multiple time Lumpinee and Rajadamnern champion. He doesn’t worry about who he will fight anymore but still has goals in the sport,

“I don’t really have any particular fighter I want to face anymore as I have fought pretty much all the top fighters at my weight. There has been talk I could be in contention for the ‘Fighter of the Year’ award again and I would be happy if I won it but I am not really too bothered.” 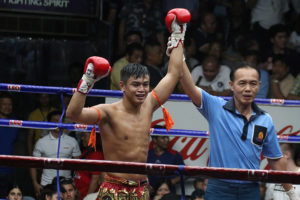 Sangmanee won the award as a teenager but has grown cynical about the sport of Muay Thai in Thailand,

“There have been other times I could have won it but nowadays it can come down more to connections than how well you have fought. The one thing that I would really like to do now though is become ONE champion, either at Muay Thai or kickboxing, I would like to try for both.”

Standing in the way of Sangmanee’s dream of winning ONE’s bantamweight Muay Thai belt is living legend Nong-O Gaiyanghadao a fighter he has followed for many years,

Sangmanee sounds open to the possibility of facing off against his compatriot in the ONE ring or cage,

“Nong-O is an incredible fighter, he is very skillful and has real power in his punches. I don’t want to say if I can beat him or not, we would have to find out in the ring, but one thing is for sure I would do everything I can to get the win and fight as hard as possible.”

It is a fight Sangmanee’s father would also like to see but he says there is no hurry to make the match,

“Nong-O is a special fighter and he has everything; great skill, speed, power and a great boxing brain. The only fighter he couldn’t really beat was Saenchai. I would be happy for Sangmanee to fight him for the belt but it would be a very tough fight as Nong-O is so good. I think it would probably be better for Sangmanee to fight a few more people first and build the fight up even more so it becomes a huge matchup for everyone.”