Where there’s a will there’s a way. That is what Shintaro Ishiwatari is telling himself as he heads into Sunday’s fight with Naoki Inoue at Rizin 28.

Inoue is without doubt one of the best fighters in the bantamweight Grand Prix. But the 36 year old sees a clear path to victory,

“I can’t say (how I will beat Inoue) but there’s a way,” he said in a recent episode of Rizin Confessions. 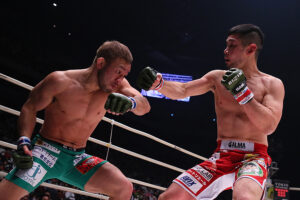 Ishiwatari’s professional journey began back in 2006. He went on to become the bantamweight King of Pancrase and reached the final of the first ever Rizin bantamweight Grand Prix in 2017.

He has won four fights out of six for Rizin. Only two men have ever beaten him since signing for the promotion, Kyoji Horiguchi and Hiromasa Ougikubo.

Horiguchi knocked him out in the final of that bantamweight tournament at Rizin World Grand Prix 2017 while, more recently, Ougikubo claimed a split decision win at Rizin 20. Ishiwatari will be an underdog against Inoue but says he has always been more focused on becoming a better version of himself than any upcoming opponent,

“I came this far just by trying to beat the weakness in myself. I believe I can show a full performance now,” he said.

However Ishiwatari knows that his career is coming towards an end. After 15 years and 38 fights it sounds like he will soon be hanging up the gloves.

In fact Ishiwatari admits that the fight with Inoue could end up being his last,

“I’m going in there knowing I will have no regrets even if this ends up being my last fight. That’s my mindset in entering the tournament.” Everything on the line

Of course Ishiwatari will not be contemplating retirement should he win on Sunday. If he prevails over Inoue a quarter final bout await and the possibility of going one step better than he did in 2017 and winning the entire tournament would suddenly come into sharp focus.

But the 36 year old isn’t getting ahead of himself. All Ishiwatari is concerned about is beating Inoue at Rizin 28 and he believes he will do just that,

“I’m putting everything on the line for this fight. I’m not looking at the quarter finals. I’m going to win this fight.”