Three more fights were added to the Shooto 0725 card today including a lightweight bout pitting Shohei Nose against Tsubasa Saito. The event is set for the Korakuen Hall on July 25th.

Nose (4-2-2) is a submission specialist who will be looking to snap a two fight losing streak. He dropped a split decision to Hikaru Yoshino at Road to ONE 7 in his most recent outing.

He goes up against another experienced opponent in Saito (9-5-1). The 28 year old is coming off a majority decision win over Takumi Arai at Shooto 0131.

Also added to the card today was a lightweight bout pitting Takashi Nakayama (8-4-1) against Daiki Yuki (9-4-3). The former was stopped by Keisuke Sasu at Shooto 0919 while the latter has won his last three.

As previously announced the featherweight title will be on the line at Shooto 0725. Ryoji Kudo and Keisuke Sasu will face off with the belt vacated by Yuki Kawana on the line.

Kawana won the title in 2017 and remained champion for three years despite only defending the belt once. He signed for Rizin immediately after defeating Shutaro Debana at Shooto 0712 last year and the promotion is now looking to crown a new featherweight king.

Kudo (10-1-1) is riding a seven fight winning streak. At Tribe Tokyo Fight 9 last December he stopped Derricott Yamamoto in the opening round, avenging the only defeat of his MMA career.

Coincidentally Yamamoto is also the only fighter to ever beat Sasu (8-1-1). He comes into this contest on the back of a six fight winning streak and was last seen in action at Shooto 0131, submitting Taison Naito in the second round.

The event is set for the Korakuen Hall on July 25th. In the super atomweight division veteran Satomi Takano (14-12) has been matched with Miku Nakamura (4-4). 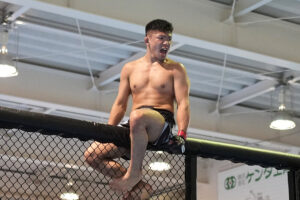