Shoko Sato is in the best form of his career. The Shooto bantamweight champion is riding a six fight winning streak with all of those victories coming via stoppage.

The 32 year old has become one of the biggest beneficiaries of the collaboration agreement between Shooto and ONE Championship, and his current run has encompassed wins with both. Sato is currently #2 in the latter promotion’s official bantamweight rankings.

Given that current #1 contender Kevin Belingon has already faced champion Bibiano Fernandes on four occasions Sato is in a strong position to ask for a title shot. In fact he was offered the fight in 2019,

“There was an offer at the around end of the year but then it didn’t happen. Ultimately the ‘when’ or ‘where’ doesn’t matter too much but because Bibiano is also popular in Japan I think it would be interesting to do it there at the October event.” 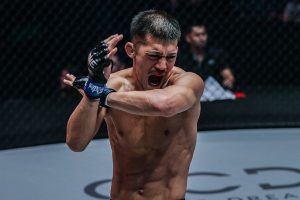 ONE: ‘Infinity’ 1 is set for Tokyo on October 25th. In these uncertain times it is impossible to know whether the event will go ahead as scheduled, or if it will be possible for fighters like Fernandes to fly in from overseas.

But Sato certainly has one eye on the date and he is happy to be sitting at #2 in the rankings, even if they don’t necessarily give an accurate picture of who the best bantamweights really are,

“I don’t think the ranking is in order of strength, but I think that will be the case if we judge from the results of ONE. I am glad that we have them though and we have a means through which to evaluate the results.”

The emergence of exciting talents like Li Kai Wen and Troy Worthen and the arrival of experienced fighters like John Lineker has made the bantamweight division a more exciting place.

Fernandes has been the dominant force for many years but Sato thinks the competition has intensified,

“I think that those fighters will be interesting for anyone in the rankings. Recently the quality of ONE’s bantamweight division seems to have increased a lot and that’s made things really interesting.” 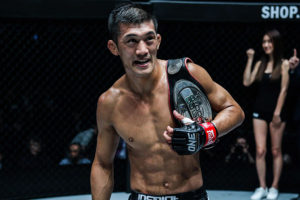 The pandemic put a pause on proceedings in recent months but ONE Championship put on two events in Shanghai this month and there is another booked for Bangkok on July 31st. During the hiatus Sato says his love of the sport kept him motivated,

“I love mixed martial arts, so I could concentrate and train even when there was no event but for me it’s an addiction to the fight, which is an irreplaceable experience. I’m satisfied with everything that I’ve achieved so far, but I want to show more good fights. The thing I miss most is the excitement in the venue. I love being the one who is playing the active role in the fight and I thrive off of the support.”

Sato is also a fan of the sport and says two of his favourite fighters are on the ONE Championship roster,

“Demetrious Johnson and Giorgio Petrosyan are two of my favourites. Technically speaking, their fights are always very exciting.”

Sato is a true veteran who has experience beyond his years. He has fought 54 times and seems to have improved with age, the current six fight winning streak if the best of his career.

Despite his experience Sato is eight years younger than Fernandes. There is no question that he has earned a shot at the champion, whether he gets it or not will likely be determined by factors beyond the control of any fighter.