Shoma Shibisai is coming off back to back wins with Rizin and promotional partner Bellator. The 30 year old’s star is on the rise as he prepares to face Tsuyoshi Sudario this weekend.

Sudario is undefeated in MMA and Shibisai sees this as a battle for domestic heavyweight dominance. He believes that beating the former sumo star at Rizin 28 would establish him as the top Japanese fighter in the division,

“The fight won’t go the distance. There will be a clear winner (and) I will prove I am the best heavyweight in Japan.”

He is aware of the historical significance of the Rizin 28 venue. It played host to some legendary Pride cards and Shibasai is excited to be a part of such as prestigious event

“I’m very grateful to get such an opportunity to fight at the Tokyo Dome.” 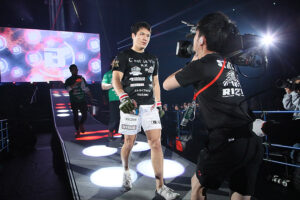 Shibasai is coming off a win over a Russian opponent at Bellator Japan. He needed less than a minute to submit the experienced Sergey Shemetov in 2019.

So confident is Shibasai of winning at the Tokyo Dome this weekend that he is already thinking about the next step in his career. The Chiba born heavyweight thinks he will need to look further afield to find a fresh challenge,

“After this I want to take on international competition,” he said.

However Shibasai is not taking Sudario lightly. His opponent has won three fights out of three for Rizin and has never needed more than five minutes to finish a fight. 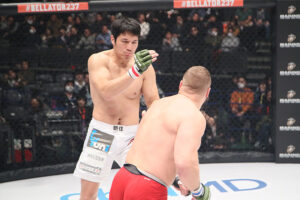 Shibasai is more experienced in MMA terms, having made his debut back in 2012, but sees this as the biggest challenge he has faced so far,

“My opponent has so much potential and he will be the toughest opponent yet.”

This is not exactly a golden age for heavyweight MMA in Japan. Rizin has not put on a heavyweight title fight since 2015 which is testament to the lack of depth in the division.

So Shibasai doesn’t just feel under pressure to win. He wants to do it in the sort of style that will remind fans why the heavyweight division used to be the biggest draw of them all,

“I will enforce my fight style in the fight and show the appeal of heavyweight fights. ” 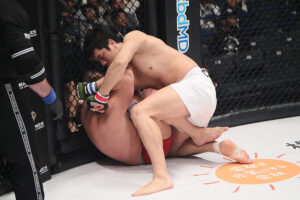 Jake Heun has legal issues in Australia which could prevent him from returning to the Rizin ring while Satoshi Ishii has been out of action since losing to the American at Rizin 20.

The Rizin heavyweight roster is in urgent need of new contenders and Shibasai feels that nothing less than the future of the division will be at stake when he fights on Sunday,

“This fight at the Tokyo Dome will determine the future of Japan’s heavyweight division.”