Sittichai Sitsongpeenong secured his spot in the featherweight Grand Prix final with a third win over Davit Kiria. Their kickboxing bout headlined the card at the Singapore Indoor Stadium.

Numerous fighters pulled out from ONE: ‘Only the Brave’ due to Covid-19 but nine fights still went ahead. In the main event Sittichai found a home for his trademark left kick right from the start.

The Thai southpaw was also throwing left knees and push kicks with Kiria completely unable to find his own rhythm as a result. There was more of the same in the second round with the Thai mixing up his attacks to very good effect. While he never looked like scoring a stoppage the constant pressure from Sittichai rendered Kiria incapable of launching any offence. With virtually the final strike of the second round he landed a glancing head kick which put the Georgian down for the count.

Sittichai continued to use Kiria for target practice in the third round but couldn’t close the show. It gave the judges a very easy decision as all three awarded the Thai a win which sees him progress to the Grand Prix final. 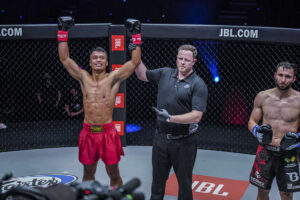 In the first semi final of the night Chingiz Allazov wasted no time in taking out Jo Nattawut. He knocked the Thai fighter down twice as well as flooring him with a teep and picked up a $50,000 USD bonus for his efforts.

Nattawut was blown away by a non stop onslaught of punches and kicks. He barely beat the count after the first knockdown and when he found himself on the floor a second time the Thai decided to call it quits.

Allazov’s devastating power and precision has been on display in both his Grand Prix bouts. He has been the most impressive fighter in the tournament and and will be looking to put in a similar performance when he faces Sittichai in the final at ONE: ‘X’. 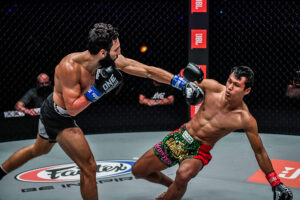 Earlier in the evening Lipeng Zhang (32-11-2) also earned himself a $50,000 USD bonus. He finished Ruslan Emilbek Uulu (13-2) with a left hook after just 32 seconds of the first round in their lightweight bout.

There was also a big win for Jarred Brooks (18-2). He dominated Hiroba Minowa (13-3) from start to finish to score a unanimous decision win and put himself in pole position for a strawweight title shot.