Sittichai Sitsongpeenong faces Davit Kiria in the kickboxing featherweight Grand Prix semi-final at ONE: ‘Only the Brave’ this Friday. The fight headlines the card and it will be a trilogy match with the Thai having won the first two meetings.

Although Sittichai has beaten Kiria twice he sees improvements in his opponents game but still sounds supremely confident,

“After watching his last fight where he knocked out Enriko Kehl early in the fight, I feel he has got a lot better technically and his punches have become stronger and sharper. However I am still confident I have what it takes to beat him and come away with the win.” 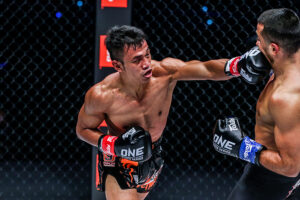 Sittichai is not overconfident though and says he has prepared thoroughly and will not be overlooking Kiria,

“I won’t get careless and overconfident as he is a very strong fighter, so we have to make sure we don’t make any mistakes. We plan to work the left kick from range and also work in some strong long knees as I know he doesn’t like these, we have been especially working on those to get ready.”

While Sittichai is not overlooking Kiria he does have his sights set on bigger fights and bigger prizes. The former Glory featherweight champion is determined to win the tournament, 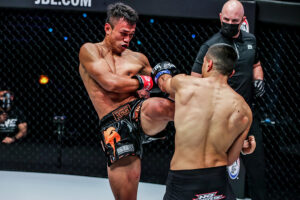 Everyone knows what Sittichai’s style is at this stage. The Thai southpaw will look to attack with left kicks and knees.

He is totally upfront about what the strategy will be on Friday and is even prepared to warn his opponent what to watch out for,

“Davit, this is our third fight and I must beat you to move on to the final. I have to warn you first to be very careful of my left kicks and knees!” 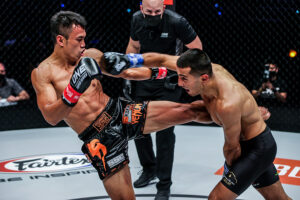 The withdrawal of Marat Grigorian from the tournament probably makes Sittichai the favourite. He is one of only two opponents to beat the Thai in the last six years.

The other is reigning featherweight kickboxing champion Superbon Banchamek and Sittichai is determined to earn another shot at him,

“I will win this and then I’ll go to fight Superbon for the belt.”