Smilla Sundell if one of the youngest fighters on the ONE Championship roster. The Swedish teenager has the biggest fight of her career coming up bit is taking inspiration from a teammate who knows all about success on the international stage.

The 17 year old trains with Stamp Fairtex in Pattaya and says the former ONE Championship atomweight kickboxing and Muay Thai champion is something of a role model,

“I see Stamp as a big sister and she is very inspiring. I want to be like her. She gives very good advice and helps me to become stronger. She pushes me to be better.” 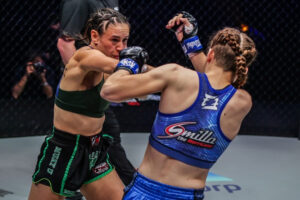 While most people of her age are worrying about exams or trying to find a first job Sundell is training full time at the Fairtex Camp. Moving to Thailand at such a young age was a brave decision but she says it has paid off,

“Fairtex has opened the door for me to be a big star. Training with world champions here at Fairtex is good and inspiring, and they always push me to another level.”

At ONE: ‘Full Circle’ she stopped Diandra Martin in the third round. Sundell applied relentless pressure to the Australian who simply could not cope with the pace her opponent was setting. 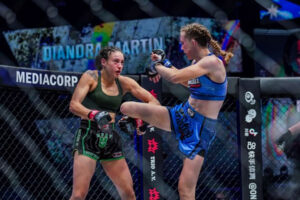 It is a moment she will always remember,

“Winning my first fight on the global stage, it was a very good experience. I was very happy, and I couldn’t wait to fight again.”

It sounds like the game plan will be similar when she faces Jackie Buntan at ONE: ‘Reloaded’ this month. Sundell is looking to become the youngest champion in the promotion’s history and will not be taking a patient approach, 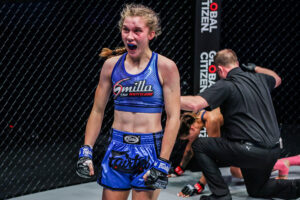 On the line is the atomweight Muay Thai belt. Buntan has won three fights out of three for ONE Championship although she has never finished any of her opponents.

By contrast Sundall put her first and only opponent away and warns Buntan that she should not take this fight lightly,

“Jackie, don’t underestimate me. I want this belt, and I will get it.”