On Friday the inaugural Road to ONE Thailand tournament got underway. The prize awaiting the eventual tournament winners is a contract with Asia’s biggest MMA promotion.

The fights took place at the iconic Lumpinee Stadium and were broadcast live on Channel 7 in Thailand. In the main event Starboy Petchkiatpetch faced Petchpanlan PKSaenchaigym. Both fighters came out firing from the opening bell and there was early drama.

Barely a minute into the round Starboy connected with a fast high kick and dropped Petchpanlan for an eight count. He was shaken straight after by a hard right hand but slowly cleared his head and started to land with some solid low kicks to finish the round well. 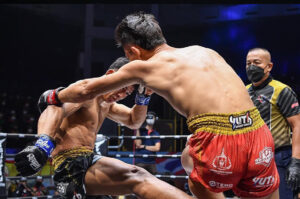 Round two was a crazy back and forth affair, with Petchpanlan landing some hard low kicks and hurting Starboy with a hard straight right that, if the ropes hadn’t held him up, could easily have been a knockdown.

Starboy came back with a fast elbow and dropped Petchpanlan for another eight count but he kept pushing forward and landed more hard punches and low kicks with Starboy looking a little ragged towards the end of the round.

Starboy came out looking to smother and frustrate Petchpanlan in the final round, tying him up in the clinch and Petpanlan didn’t have enough energy left to mount any serious attacks, allowing Starboy to advance to the semi-finals of the flyweight tournament with a decision win. 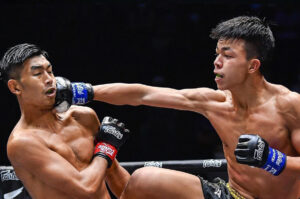 Vietnamese/American Thai Ngan Le faced Thailand’s Duangdaonoi Luksaikongdin in a Womens Atomweight bout. Thai Ngan was the bigger and more aggressive of the two, but was cut by a sharp elbow early on by Duangdaonoi. The Thai fighter looked to keep her distance and pick off Thai Ngan with sharp temps and left kicks and although she looked a little ragged and tired in the final round, did enough to outscore Thai Ngan and advance to the semi-finals. 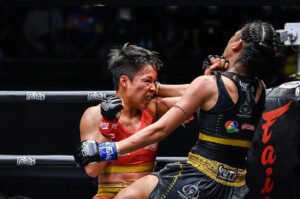 Yod-IQ Pksaenchaigym scored a decision win over Kwantung Realfight in their featherweight quarter-final match. Yodphupar Tor Yotha faced former Lumpinee and Channel 7 Champion Taleythong Sor Thannapetch in the other featherweight clash on the card and stopped him late in the opening round

In the atomweight tournament Gamlaipetch Petchyindeeacademy beat Pancake Kiatyongyut by decision to advance to the semi finals. 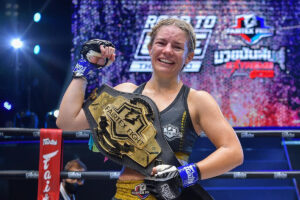 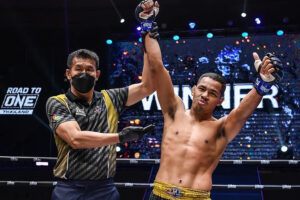