There were three interim titles on the line at Pancrase 324. In the headliner Takayo Hashi overcame Nori Pravajra to win the strawweight belt by decision.

The veteran boasted far more experience with a 17-8-1 record having been in with the likes of Ji Yeon Kim, Roxanne Modafferi and Cat Zingano. This compared with 23-year-old Nori who only had eight pro fights and had yet to experience a five rounder.

Both women came into the bout on the back of wins over Raika Emiko. Nori’s encounter was the more recent having come at Pancrase 321 in May. Hashi  set her stall out to attack, looking to utilize her kicks to keep Hashi at bay. The southpaw took a while to find her range before landing a solid body kick with the rear leg.

She launched several side kick attacks, and while both fighters scored with low kicks it was the young, Sendai-based fighter who was looking to throw more volume. Hashi, however, soon began to find her groove.

She caught a side kick in the second stanza and secured a double leg. The 44-year-old then promptly dished out some ground and pound, landing with some sharp elbows from top position with Nori left on her back for the remainder of the round. The older fighter repeated the trick as she caught Nori’s kick in the third and tripped her down to the ground. Working between side control and half guard, Hashi showed excellent top pressure and continued to soften Nori up with elbows and rights hands.

Nori landed with a head kick and a sidekick to the head in the fourth, but it was Hashi who was stalking forward, looking to plant the right cross. Nori’s strikes were certainly more eye-catching, but the veteran got a late take down and went back to work with the ground and pound which probably didn’t go unnoticed by the judges.

In the final round Nori again showcased a lovely side kick that landed cleanly on Hashi’s head. But she had little response to her opponent’s grappling. The Tokyo-based fighter soon had Nori in a body lock before bullying her to the canvas. From there, she worked her way to full mount.

Nori was able to escape the position but still endured a solid ten seconds of unanswered punches at the end of the fight. It would have left an indelible impression on the judges.

All three judges scored the fight for Hashi who improves to 18-8-1 and looks to have got her a date with Emi Fujino for a shot at the undisputed title. Nori slips to 4-5. 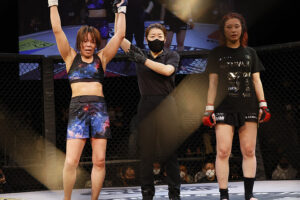 Elsewhere, Masayuki Kikuiri (8-2) got the unanimous decision against Akihiro Muriyama (22-11) to secure the interim welterweight title. In the evening’s other title fight, Toru Ogawa (14-8) triumphed over Masatatsu Ueda (17-7) for the interim flyweight strap.