The draw for the Rizin Lightweight Grand Prix was revealed yesterday. Arguably the most eye catching among the eight matchups was the quarter final bout between Tatsuya Kawajiri and Patricky Freire.

At the age of 41 Kawajiri is surely coming towards the end of his career. But how many mixed martial artists can say they have fought for the Pride, Dream, the UFC, Strikeforce, ONE Championship and Rizin?

In fact Kawajiri has conscious of the fact that Bellator is the only major MMA promotion missing from his resume. He thinks that beating one of the promotion’s top lightweights would go a long way towards filling that gap, When it comes to competing in tournaments this will not exactly be Kawajiri’s first rodeo. He’s got plenty of experience to draw on dating all the way back to 2002 when he won the Shooto 143.3lbs Rookie Tournament, 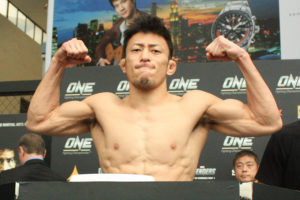 Kawajiri is coming off a decision win against Ali Abdulkhalikov at Rizin 17. The Russian is 15 years his junior and was undefeated coming into that contest.

So Kawajiri’s confidence should be high but he knows Freire brings an even greater threat. Survival will be the veteran’s watchword on October 12th,

“I know he said he respects me and all, but in the ring he is going to try to take my head off. I’m looking forward to a battle and to survive to make it to NYE.”