Thanh Le packs a punch. The featherweight champion has knocked out all four of the opponents he has faced in his ONE Championship career so far.

But it is not just opponents who are getting damaged! The 36 year old hits so hard that he sustained some serious hand injuries during his last fight.

He knocked out Martin Nguyen in the third round at ONE: ‘Inside the Matrix’ to capture the featherweight title and was surprised the fight lasted as long as it did having suffered

“I had three broken bones in my left hand (and) a broken bone In my right hand. I definitely hit that man with 10 to 12 knockout shots that would have put anyone else down no question. I hit that man with a lot of power, I hit very hard, props to him for taking it for the first two rounds.”

That fight was over a year ago and Le will be defending his featherweight title for the first time at ONE: ‘X’ this Friday.

‘I have to take advantage of being at the top. Knowing that I’m going to get the best matchups. The ones that are dangerous. I’m going to use this power for good,’ said Le.

Tonon is a BJJ black belt and Le has those powerful punches. But he believes that both men have evolved beyond the point where they can be considered specialists in just one area, 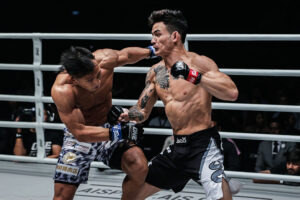 Should he prevail on Friday then Le is looking to move up a division and challenge the best lightweights. The title might be the property of Ok Rae Yoon but he has his sights set on Christian Lee,

“I’d like to move up to lightweight. Christian (Lee) I’ve been eyeing him up for a long time. He’s an extremely well-rounded, great fighter,” he said.

Of course Le is aware that Lee is no longer the champion and he would not turn down a fight with Yoon,

“Obviously, he lost a fight (but) I don’t know if I completely agree with that decision. Ok is a great fighter as well. But that’s something I want to do, I want to move up and go and get that belt from those guys.”

He needs to get past Tonon first. But should he prevail at the Singapore Indoor Stadium this week Le will be looking to add a second ONE Championship belt to his collection. 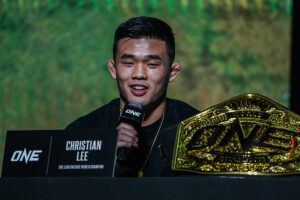