The featherweight fight between The Korean Zombie and Alex Volkanovski is official! Both men already confirmed they would be facing each other and the featherweight title bout has been made official by the UFC.

They will face each other at UFC 273 in Jacksonville. Chan Sun Jung steps in to replace the injured Max Holloway who had originally been booked to face Volkanovski.

Volkanovski (23-1) has won ten fights out of ten since signing for the UFC. The Australian will be making the third defence of his flyweight title.

Jung (17-6) is coming off a decision win over Dan Ige at UFC Vegas 29. He prepared for that bout at Fight Ready in Arizona and announced he would be using it as a base for all future fights.

Also on the card is the long awaited rematch between regular bantamweight champion Aljamain Sterling (20-3) and interim champion Petr Yan (16-2). The Russian was disqualified at UFC 259 for throwing an illegal knee in the fourth round of a fight he appeared to be winning comfortably. 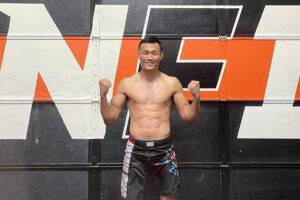