Tiffany Teo submitted Meng Bo with a rear naked choke at ONE: ‘Heavy Hitters’. Her only career losses have come in title fights and she is clearly the #1 contender at strawweight.

But Teo has already lost twice to reigning champion Xiong Jing Nan and has her sights set on an opponent in the atomweight division. She wants to drop down in weight and take on Ritu Phogat.

“I would love to (fight Ritu Phogat). I think that would be a great matchup. I think (in terms of grappling) we’re pretty much on par,” she said. 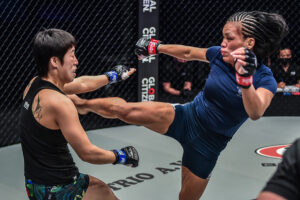 Good to be back

Phogat also beat Bo, scoring a decision win over the Chinese fighter in the atomweight Grand Prix semi final. For Teo this is another reason the matchup makes sense,

“It feels great to be back. Throughout the whole camps that’s all we have been working, on getting the takedown, ground control and going for the sub.”

Phogat set the blueprint for beating Bo. After a torrid first round the Indian started using her wrestling and was able to totally dominate the Chinese fighter on the ground.

Teo was clearly paying attention and says she employed a similar strategy,

“We tried to capitalize on her weaknesses and use it to our advantage.” 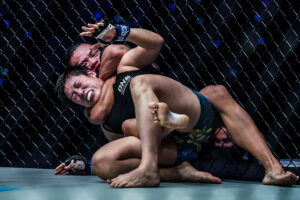 No other Singaporean fighter has enjoyed the same sort of sustained success with ONE Championship that Teo has. She has been on the roster since 2016 and won seven fights out of nine for the promotion, beating the likes of Michelle Nicolini, Ayaka Miura and Bo.

She is used to fighting at the Singapore Indoor Stadium but after competing in front of an empty house Teo enjoyed having the fans back,

“It was a really great feeling, I could hear everyone cheering for me and it felt good.”

It seems that Xiong is going to drop down in weight too, she wants a trilogy fight with Angela Lee. So there aren’t many potential strawweight fights out there for Teo and that is why she wants to face Phogat next,

“I think Ritu makes sense for now at atomweight. We both just got our win against the same girl (Meng Bo) so that should be fun.”