Kickboxing promotion Max FC entered the new year with an entertaining display of up-and-coming talent in Seoul. A spot in the final of the lightweight Grand Prix was up for grabs and the interim middleweight champion was emphatically determined in the main event.

In the first lightweight semi final of the night, Tiger Muay Thai representative Trent Girdham and Shootboxing veteran Yushi Ogino faced off. The fight started with an abundant amount of kicks from both parties and the Australian getting the better of the exchanges.

The action stalled for a moment in the first round after Girdham connected with a spinning back kick to the groin that had Ogino wincing in pain. After the fight resumed, Ogino became more aggressive with his attacks but Girdham countered with precision, getting a knockdown at the end of the first with a left hand.

Girdham continued the onslaught into the second round and threw a combination that finished with a clean left hook to the face that floored Ogino. The Japanese fighter tried to get up during the count but stumbled against the ropes so the referee called off the action. In the other semi final Jo San-Hae and Kwon Gi-Seop had one of the craziest brawls in promotional history. From the start of the first round, these two young prospects were looking to engage to the delight of the fans in attendance.

Even though Kwon was the aggressor throughout the fight, Jo did an excellent job checking kicks and staying away from many of the power shots being thrown. After three minutes of fisticuffs, Kwon had been bloodied and battered from uppercuts and a flying knee.

The second and third were much of the same with Jo bouncing from corner to corner utilizing the teep to keep Kwon at bay and dodging punches effectively with head movement. With everything on the line, they threw all they had into every strike until the bell rang in the final round.

Jo took the decision on the scorecards and now moves onto face Trent Girdham in the finals of the Lightweight Grand Prix commencing in June at Max FC 19 in Iksan. Luckily for the South Korean, the tournament was not a one-night affair as this fight took a considerable toll. 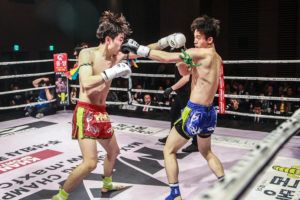 In the main event, top contender Jung Sung-Jik overwhelmed Jang Tae-Won to capture the interim super middleweight championship. He had a very simple game plan but Jang really had no answer for it and succumbed in the second round

Next up for Jung is a matchup with the reigning king of the division Hwang Ho-Myung, who was pulled from the headliner because of an undisclosed injury sustained during his training camp.

“Originally, it was not Jang Tae-Won but instead Hwang Ho-Myung who was supposed to be laid out on the canvas. Now let’s have a real championship fight,” Jung stated in his post-fight interview in the ring.

A date for this title fight has yet to be determined since Hwang is still tending to his wounds.

The co-main event was a non-title bout between featherweight champion Kim Jin-Hyeok and Shootboxing hotshot Possible K. The South Korean took out his Japanese adversary at the beginning of the second round with a flurry of punches after a standing eight count.

The next event for the promotion will be Max FC 18 taking place on April 13 in Hongseong and the headliner will be a heavyweight title fight between champion Kwon Jang-Won and challenger Myung Hyun-Man.