If you had told Troy Worthen a year ago that he would be based permanently in Singapore and preparing for a fight in Kuala Lumpur he would probably have been surprised. The American would never have been on the radar of Asia’s biggest MMA promotion had had he not applied for an open tryout at one of the region’s top gyms.

Worthen, who owns a 4-0 professional record, was one of six mixed martial artists selected to join the Evolve MMA fight team after an exhaustive tryout process which was serialized on YouTube. A contract offer from ONE Championship followed and he makes his promotional debut next month.

He’s been matched with China’s Chen Rui at ONE: ‘Masters of Destiny’ and is determined to put on a show,

“I’m just excited to show everybody what I can do, why I deserve to be there so expect fireworks.” 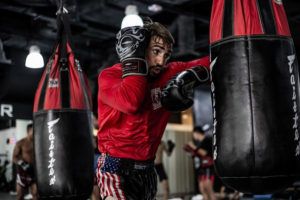 The American was a decorated wrestler during his university days and holds a brown belt in BJJ. He sees a contrasting skillset in his opponent,

“It looks like he’s a boxer (because) he likes to strike and he likes to throw a lot of power. He looks good but at this level you expect everyone to be good,” he said.

Up to this point Worthen has been fighting on some small shows in the U.S. but believes an opportunity of this magnitude is overdue,

“I think I deserved to be on the world stage for a little while now,” he said.

His opponent comes into this bout with a 7-0 record and Worthen wants to prove himself against this type of opposition,

“I’m not looking for easy fights. I’m not scared to challenge myself, so him being an undefeated young fighter is all the same to me.” His background might be in wrestling but the 26 year old is not necessarily another Ben Askren. Versatility is the keyword and Worthen says he does not always know what he is going to do until the fight actually starts,

“I think my fighting style is more free flow. I never want a straight game plan where I’ll just go for takedowns or I’m just going to strike with this person. I just adjust on the fly, depending on what I’m feeling that night.”

This style has helped him to fit in at Evolve MMA. The camp has embraced all the aspects of the sport by hiring decorated fighters from across the combat sports spectrum and Worthen is making the most of this opportunity,

“It’s definitely made it a lot more streamlined, having just a constant plethora of champions that have different knowledge from different sports always in the same room. I can look to the right and I have a Jiu-Jitsu champion to answer all my questions about grappling, I look to the left and I have a Muay Thai champion that can help me with clinching and striking.” 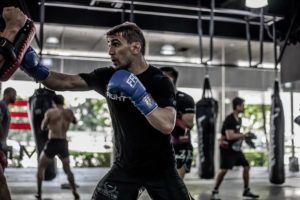 Evolve MMA released a series of videos detailing various aspects of the tryouts. There were some elite mixed martial artists involved, including several ONE Championship and ONE Warrior Series veterans, but even seasoned fighters were struggling with the intensity of the training.

By contrast Worthen was in his element and says he enjoyed the whole experience,

“I do this every day and I do this because I love it. For me, the fight is where I have fun.”

Rui is coming off an impressive win at ONE: ‘Reign of Valor’ while Worthen has never even fought outside of Florida. Both are undefeated but the American arguably has a bigger point to prove, given that he’s completely unknown in Asia.

The Chinese fighter tends to win inside the distance and Worthen thinks his opponent’s style is tailor made for him to make a big impression on his ONE Championship debut,

“I focus on myself (but) I’m glad he’s game. It gives me a bigger spotlight to shine.”