Weili Zhang took to Instagram in the aftermath of her defeat to Rose Namajunas at UFC 261. The former strawweight champion is hoping she will get an immediate rematch.

Zhang was stopped in just 78 seconds in Jacksonville. It was the first time she had been beaten since 2013 and the 31 year old is hoping she will be granted an immediate rematch:

Zhang was magnanimous in defeat and congratulated Namajunas on her victory,

“I want to congratulate Rose on her victory . She bounced back from her defeat.”

Namajunas was knocked out by Jéssica Andrade in 2019 but went on to beat the Brazilian in a rematch. Zhang is hoping to bounce back with a rematch win of her own,

“I believe I will also come back, only beat a great champion, to become a legend, and beat a legend, I will become a new me.”

Zhang has already reached the pinnacle of the sport once, winning the UFC strawweight title. She realized that ambition but is now determined to recapture the belt she lost last weekend.

The 31 year old sounds extremely motivated and says she now has a ‘higher goal’,

“Before, my goal was to win the UFC championship but today I have a higher goal than that.”

Going on a 21 fight winning streak is not normal in MMA. Everyone loses eventually, with the recently retired Khabib Nurmagomedov being one notable exception, and Zhang thinks she has a better understanding of the sport after her second defeat,

“It’s normal to lose and win. That’s the UFC. Andrade, Joanna, Rose have all lost and they all come back and try again. I have deepened my understanding of UFC today. So I believe I can come back. Hopefully the UFC will schedule a rematch soon.” 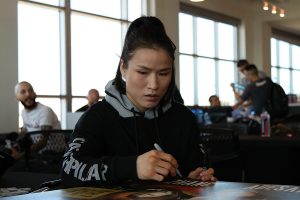