Kantharaj Agasa was making his promotional debut at ONE: ‘Full Blast’ but the Indian looked like a man reconsidering his career choices by the end of the night. He was unable to get Xie Wei down and became increasingly frustrated and exhausted before retiring at the end of the second round.

The Indian came into the contest with more impressive record than his Chinese opponent. He was desperate to get the fight down and shot for takedown after takedown before securing a hip toss only to see Wei bounce straight back up.

He landed another hip toss but again Wei was back on his feet immediately. Agasa was punished with punches after another takedown attempt fell short and seemed to lose heart at this stage, as the Chinese fighter started backing him up while switching effortlessly from orthodox to southpaw stance. Agasa was circling away at the start of the second round too as Wei switched stances, landing a left to the body before taking the Indian’s legs out from under him with a right low kick. The Indian shot for a single leg but it was easily stuffed and the round finished with the Chinese fighter narrowly missing with a flying knee as his opponent ducked down for a takedown.

It became apparent between rounds that the knee had glanced the head of Agasa, with blood pouring from the wound. The doctor did not seem too concerned but the Indian decided enough was enough and elected not to come out for the third and final round.

With the win Wei improves to 7-3 and his spell with ONE Championship has been extremely impressive so far with two stoppage wins and a debatable decision loss to top ranked flyweight Danny Kingad. The same cannot be said of Agasa who drops to 11-3 after an underwhelming debut. 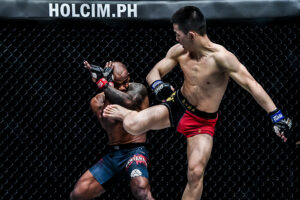 Earlier in the night featherweight Edward Kelly (13-8) scored a split decision win over Ahmed Faress (16-4). The Egyptian came close with a triangle attempt in the second stanza but ran out of steam in the final round.  and sees his two fight winning streak snapped.

In a catchweight contest Anthony Do (8-4) submitted Liang Hui (5-7-1). The headliner was a bantamweight Muay Thai fight with Saemapetch Fairtex stopping Kulabdam Sor Jor Piek U-Thai with a left hand to the body in the opening round.