Xie Wei was handed a very difficult matchup on his ONE Championship debut. He was matched with top Filipino flyweight Danny Kingad in Manila.

Wei dropped a decision to Kingad at ONE: ‘Fire & Fury’ but thinks the outcome could and probably should have been very different,

“I have already passed the hardest test in my ONE debut against Danny Kingad, and to be honest, to this day, I still think I won that fight. But that’s just history now.” 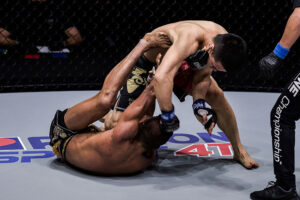 It’s the only blot on the 24 year old’s recent record. He won four fights out of four for ONE Hero Series, another fight on ONE Warrior Series and is coming off a win over Chan Rothana at ONE: ‘Collision Course’.

Wei feels that he earned his spot on the ONE Championship roster the hard way,

“That was a very tough journey. I got on a five-bout winning streak and had five finishes, four of which against the most dangerous guys in China, to get to this stage (and) I am the first one who graduated from ONE Hero Series to ONE Championship.” 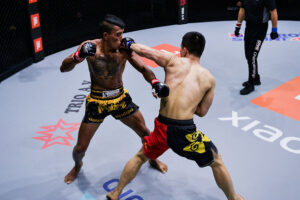 Eyes on the gold

He takes on Kantharaj Agasa at ONE: ‘Full Blast’ which is being broadcast tomorrow night. Neither is currently ranked but Wei says he has no interest in just being a contender,

“Being a regular contender has never been my plan. My eyes have always been on the gold.”

Xiong Jing Nan was set to defend her strawweight title at the postponed ONE: ‘Empower’ event. There has never been a male Chinese champion an an elite MMA promotion and Wei is determined to be the first,

“I will get back to my winning streak very soon and in the near future, I’ll become China’s first male world champion.”