Pancrase 305 is set for Tokyo on May 26th and will feature a flyweight fight between two top ranked fighters. Former flyweight King of Pancrase Mamoru Yamaguchi faces Toru Ogawa at Studio Coast in Tokyo, Japan.

Yamaguchi (31-12-5) captured the flyweight title in 2017 but came up short in his first title defence. The 40 year old has lost his last two fights and is going up against a fighter nine years his junior.

Ogawa (10-7) has spent the majority of his career with Pancrase and had some real ups and downs. He lost six out of his first seven fights as an amateur and professional but then bounced back to put together an eight match winning streak.

His form has dipped again in recent years and Ogawa is 2-3 in his last five fights. The 31 year old is currently ranked #5 by Pancrase while Yamaguchi is at #4 in the flyweight rankings.

Next up is Pancrase 304 which is set for Studio Coast on April 14th. The flyweight and lightweight titles will both be on the line. 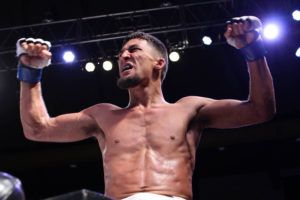