There will be plenty of interest surrounding the fortunes of strawweight Yan Xiaonan when the Chinese fighter makes her next octagon appearance, especially from the UFC brass.

The promotion’s matchmakers are well aware of the stakes on offer in China, and their recent efforts to infiltrate and establish a long-lasting foothold in that market reflect that.

And that’s where the key to unlocking that market lies, developing new stars to capture the attention of the rapidly growing MMA fanbase in the planet’s largest market. The creation of a UFC Performance Institute in Shanghai last year, the first of its kind to be built outside of the US, signals their commitment to that cause.

Xiaonan is a fighter who could potentially add plenty of impetus to that Chinese offensive. She’s witnessed first hand the sport’s growth in the region in and is starting to become something of a celebrity in her gym,

“People say they know me when they come,” Xiaonan says.

“If I keep winning I may become famous one day, because the UFC is getting bigger in China.”

The operative word there, of course, is ‘winning’, and the 30-year-old will look to add a fifth consecutive octagon victory to her record when she takes on Poland’s Karolina Kowalkiewicz at UFC Auckland on February 23rd.

The #14 ranked Kowalkiewicz represents Xiaonan’s first foray into the upper echelon of the division, and she insists she’s more than ready for the step up in quality,

“I was very happy to hear about it,” said Xiaonan.

“Karolina is a very good fighter with a top record, I’m very glad to fight her.”

Her recent results suggest it’s a well-deserved elevation. Xiaonan has used her slick brand of high energy volume striking and sturdy defense to some comprehensive wins, most recently against Angela Hill, while she turned some heads in her debut fight on U.S. soil at UFC 238 in Chicago back in June.

“That fight helped give me a lot more experience for sure, as well as better movement,” she said of the lesson learned from that bout. 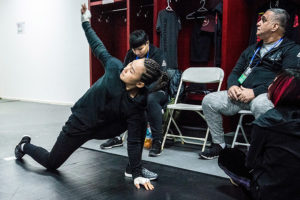 They are lessons she’s been learning for some time now. Xiaonan has been fighting professionally since 2009, after the limited opportunities on offer within the sanda scene necessitated a change of approach,

“When I heard about UFC, then I made my decision to learn MMA and focus on UFC. But I have been learning Sanda since 2004,” she said.

Also known as sanshou, sanda is martial art conceived in China and developed by its military, which is essentially a hybrid of traditional kung fu techniques with modern combat techniques. It combines kickboxing with wrestling-style takedowns and judo-inspired throws, as well as knee and elbow strikes.

That influence shines through when Xiaonan is inside the octagon, and it’s helped make her a difficult puzzle to solve. 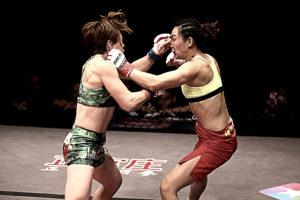 Just ask Japanese fighter Syuri Kondo, who felt the full wrath of Xiaonan’s arsenal in Beijing back in 2018, where she absorbed over 150 significant strikes – a record for the strawweight division – on her way to a heavy loss.

“I love MMA now, I have passion for it and I also think I’m lucky to have what I’m passionate about as my profession,” Xiaonan said

Her opponent down under will likely be an altogether different – and much more dangerous – proposition. Kowalkawiecz has a pure kickboxing style that has seen her notch wins over some of the division’s elite through her five-year tenure with the UFC, including former champion Rose Namajunas.

She’s undoubtedly struggled in recent times, having fallen to three consecutive losses since September 2018. Desperation can be a lethal ally in the world of combats sports, but Xiaonan believes she has a distinct edge.

“I definitely need to be aware of her elbows and knees, but I think I’m physically stronger and have better boxing skills, and I’m more agile,” said Xiaonan.

“I would love to finish the fight as soon as possible, this is what I’m looking forward to achieve, and I think I will do that within two rounds.” 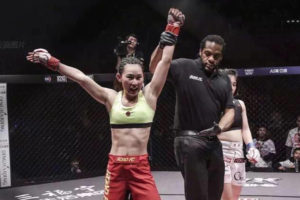 Three of Xiaonan’s four UFC fights have been in Asia.  She’s excited to visit New Zealand and to explore a new country,

“I know New Zealand has great food, nice weather and beautiful views. I haven’t been there yet, I’m excited to go there. For now, I’m 100% focusing on the fight. After that, I want to do some traveling around the city.”

But there is important business at hand. Having only fought once last year Xiaonan is hoping to be extremely active in 2020 and knows that a win at UFC Auckland would be the best possible start.

She knows exactly what she wants to achieve in the next 12 months and Xiaonan wants to crack the top ten by the end of the year,

“But my goals for 2020 are to have three UFC fights and get into the top ten rankings.”