Yushin Okami ‘can’t wait’ to compete at ONE: ‘For Honor’

Yushin Okami makes his ONE Championship debut on Friday and it’s fair to say the 37 year old is excited about it. He faces Kiamrian Abbasov in Jakarta and wants to make a big impression on the Indonesian audience,

Okami’s career has taken him all over the world. He’s fought for the UFC, WSOF, PFL and Pride and competed in a diverse range of countries and regions including North America, South America, Europe, Australasia and, of course, Asia.

Okami’s welterweight bout with Abbasov will serve as the co-main event at ONE: ‘For Honor’. He joins a promotion which is making big waves in Japan and is determined to make his mark,

“I’m honored to be able to compete in this kind of event, and I understand how big of a competition this is in martial arts. I respect it very much as an Asian, and my number one motivation is to prove myself as Yushin Okami in that space,” he said. 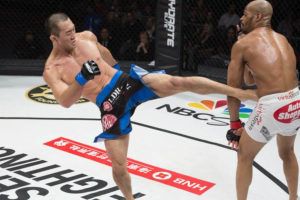 However this well traveled fighter hasn’t always been a confident individual. As a child he says he was very uncomfortable in unfamiliar environments,

“When I was little, I was a bit shy. I was scared of challenging myself to try new things. I was comfortable around people I knew for a long time, but, if I had a new class or had to be in a new environment, I wasn’t very outgoing,” he said.

Okami aspired to be a pro wrestler. But he didn’t make the grade and instead decided to focus his efforts on actual fighting, making his pro debut in 2002.

He won by decision and it was a feeling he will never forget,

“The feelings of exhilaration and happiness I felt after winning were feelings I had never experienced before in judo, or in life. I felt very accomplished,” he remembers. A date with destiny

That first win would shape the rest of Okami’s life. It allowed him to finally move on from his dream of being a pro wrestler and focus on a new goal,

“I fell in love with mixed martial arts and decided I wanted to compete again. My desire to become a pro wrestler went out the window.”

From that moment onward Okami knew exactly what he was destined to do,

“I (felt) the excitement to my core. In experiencing those feelings I lost sight of my dream to become a pro wrestler.”

Okami knows what it is like to represent Japan on the international stage. He has fought overseas on 28 separate occasions but will still be motivated by a strong sense of patriotism when he faces Abbasov in Jakarta on Friday,

“I’m very proud of the fact that I am Japanese and that I learned MMA in Japan. I’m proud to show (what) I’ve learned in Japan to the world, by competing in ONE Championship.”