Sanford MMA has emerged as something of a mecca for ONE Championship’s top fighters. The camp in Florida has served as a base for Aung La Nsang, Brandon Vera and Martin Nguyen with another flyweight contender recently taking the trip to Deerfield Beach to train there.

Yuya Wakamatsu is currently at #3 in the flyweight rankings. He says that travelling to the US to train seemed like a logical progression,

“I’ve wanted to try it for a while. I’ve always thought that it’s up to me to get stronger (and) America is big and cutting-edge in every way so I decided to try it out for the first time.”

He says there are parallels to the time he first came to Tokyo as a teenager,

“It was the same for me when I came to Tokyo from Kagoshima. I thought I was like a big fish in a small pond. I had an image of Tokyo as a dreamy place, but I found it was not so much when I got there. It’s the same with the US.” 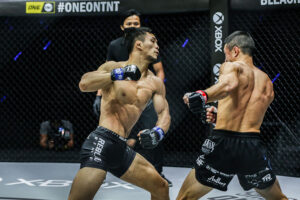 Wakamatsu believes that the flyweights in Asia are as good as any in the world. But he felt a trip to Sanford MMA was necessary in order to expand his horizons,

“I felt that I needed to update my way of thinking by gaining experience. In this sense, I came to America to expand my world.”

While Wakamatsu is hoping for a title shot he feels there is no rush. After all he is six years younger than reigning flyweight champion Adriano Moraes,

“Right now, Moraes is at the peak of his powers but I’m still in the developmental stage,” he said. 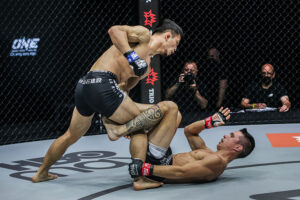 Moraes recently finished Demetrious Johnson in the second round at ONE on TNT. Results in the flyweight division don’t get much more impressive than this.

Wakamatsu is aware of the champion’s strengths but feels he has a chance to knock Moraes out,

“His advantage is that he is physically and mentally strong, but we’re both human beings. If I could land a big shot on him, he would fall.”

The ONE Championship calendar is currently on hold as Covid-19 cases in Singapore have increased. But it sounds like Wakamatsu is already preparing for a possible fight with Moraes,

“If I avoid grappling with him, I can give him enough damage to win. There are ways to win a bout, like fighting patiently until his heart cannot take it anymore, or beating him with punches. That’s what I am thinking about.”

He is hoping the title match with Moraes will happen sooner rather than later,

“I would like to have a title match as soon as I can. The time is limited, and I don’t know when we’ll be able to compete now.”

But Wakamatsu is open to the possibility of either taking on one more contender before facing Moraes or sitting on the sidelines until the Brazilian has defended his belt one more time,

ONE Championship does not currently have any Japanese champions. The likes of Kotetsu Boku, Koji Oishi, Nobutatsu Suzuki, Shinya Aoki, Yoshitaka Naito and Yosuke Saruta have all fallen by the wayside.

Wakamatsu would like to redress this balance by winning the belt and showing the world what a real life samurai looks like,

“I want to win and be the champion so that the whole world can see what a samurai is actually like.” 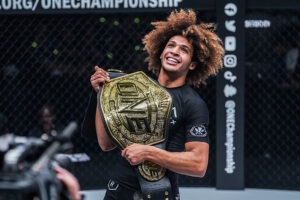