Howson signed for ONE Championship last July. The 40 year old thought his fighting days were behind him but says the offer was too good to turn down,

“So when I officially signed the contract I was basically retired for fighting and working a full time job. I decided to make a huge sacrifice and and quit the job to be back in the gym at Bad Company full time training and coaching. there was no way I could train like I need to in order to be ready for ONE Championship whilst working full time. It may sound like a stupid thing to do at 40 years old but this is a dream come true and I had to give it one last chance.”

Preparation for the fight was never going to be easy with it being so close to Christmas, so Andy decided to sacrifice the festivities to make sure he is 100% ready,

“Liam (Liam Harrison, his cousin) was heading to Thailand to train and fight on the Bangkok card and, alongside Richard Smith, he is my main pad man back home. Plus, with it being Christmas, the gym was going to be closed for a couple of weeks so I kind of had no choice other than to go out to Thailand with him to train. And to be honest, I’m so glad I decided to. Training went great and I came back to England already on weight and ready to go.” Tonna actually asked for the fight and matchmakers obliged. The two will face off at ONE: ‘Warrior’s Code’ in Jakarta and Howson admits he was surprised to hear other strawweights calling him out so soon after signing,

“It was done in a very respectful way, basically saying he was excited to see I had signed and was in the same division and he would be honoured to share the ring with me and that it would be a great fight for the fans. To be honest I was a little shocked about it, I was like, ‘I’ve barely signed the contract and already the old man is getting called out by these youngsters.’ But it’s part and parcel of the sport and I’m just gonna have to show him that you don’t always get what you wish for.”

Howson has been in some truly memorable battles over the years that have seen him earn the nickname ‘The Lord of War’, but he is never one to take an opponent lightly and has done his homework already in preparation for battle.

“I’ve seen Josh fight a few times and obviously have seen all of his fights on ONE Championship. First thing you’ll see is he is one tough, tough kid and I’ve a lot of respect for him for that. I’ve seen him hurt and dropped but he never quits and has a big heart like myself so on paper our styles make an insane fight.” 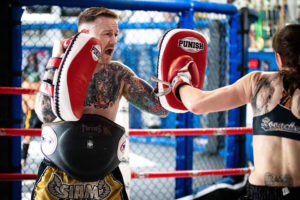 The strawweight division is in its infancy and Howson believes Tonna could be more dangerous than he was at flyweight,

“He’s also been fighting up in the 61kgs division, fighting much bigger guys than me so it’s going to be a hard fight and I’ve prepared for just that. There’s no set game plan really. Obviously there is specific things I’ve noticed about him so been working on a few things, but not a game plan as such.”

Tonna says he has been following Howson’s career for a while,

“Firstly I am huge fan of Andy, I have watched him for as long as I can remember. I met him and Liam when Liam fought Petchmorrakot in Malaysia last year. It’s a mix of reasons I guess, I want to always challenge myself against good guys, and his profile is huge so I knew if we fought there would be a lot of eyes watching and if I was a fan it’s a fight I would want to watch. So with that I think if I win and put on a good show it will push the right direction to fight Sam-A, which is who I want to fight next.”

Howson knows that time is not on his side. But he still harbours dreams of winning a Muay Thai title with ONE Championship,

“So I need to take it fight by fight, especially with my age and hoping the body holds up. But so far all is okay and I’m feeling good, in an ideal world obviously my sights are set on smashing all the odds against me and been able to get a shot at the ONE Championship and winning it, but like I say that’s in an ideal world so let’s see what happens.” 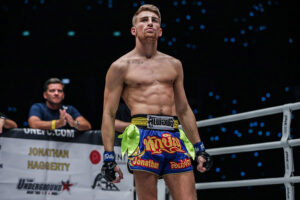