Liam Harrison is out to entertain at ONE: ‘A New Tomorrow’

Liam Harrison is looking to score his first ONE Championship win this Friday when he takes on Mohammed Bin Mahmoud at ONE: ‘A New Tomorrow’ in Bangkok.

This will be Harrison’s third bout in the ONE Super Series and he faced very stiff opposition in his first two matches. The Englishman was stopped by Petchmorrakot Petchyindee in a short notice fight and then dropped a decision to Rodlek PKSaenchaigym.

Despite the defeats competing for ONE Championship has been a positive experience for Harrison and he cannot wait to be back in action,

“So far my experiences fighting on ONE have been great, they know how to take care of the fighters and the production of the shows is incredible. It is amazing to be back fighting in Bangkok.” 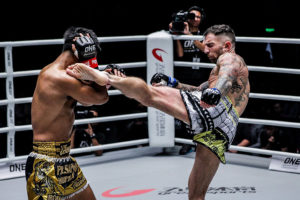 In recent years he has headlined events all over Europe but Harrison has not fought in Bangkok since the inaugural Thai Fight tournament in 2010,

“To be honest I have been waiting for a chance like this for years and I’m really looking forward to reminding everyone in Bangkok how exciting my style can be. On the night I plan to bring absolute fireworks to the show,” he said.

Bin Mahmoud is something of a mystery to Harrison who does not tend to spend hours reviewing footage of his opponents before bouts,

“I’ve seen bits of him online, but not too much. I’m just going to get in there and fight my fight and do what I always do and go looking for the early finish from the off.” 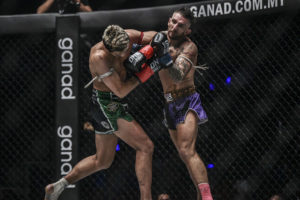 “It is fair to say in the hands of a skilled Muay Thai or kickboxing practitioner they are a dangerous glove to wear and they turn everyone into a hard puncher. One mistake and you’re likely to pay the cost big time!”

Harrison believes he would have beaten Rodlek if they had been fighting in normal gloves,

“I felt I won the majority of my fight with Rodlek, but one mistake in round two and I took an 8 count which cost me the win. I work a lot more boxing and head movement now. Defence is the key in these gloves.” 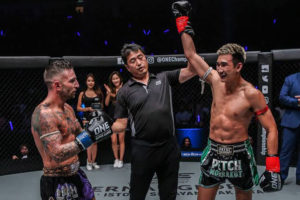 At the age of 34 and with over 100 fights on his record, many fighters would be planning their retirement but Harrison has shown no sign of wanting to hang up the gloves. He still feels he has plenty left to give and has taken steps to preserve his longevity,

“I still feel like I have plenty in the tank and I’m still managing to compete at the top level. I’m just going to [be] sensible now and take fights at the correct weight of 65kgs and under. I take much better care of my body these days, in my 30s than I ever did in my 20s and feel stronger and sharper than ever. My body will tell me when it’s time to stop but I still feel like I have a good few years left in me yet.”

Harrison’s list of previous opponents is impressive. He has been in with Fabio Pinca, Saenchai Sor Kingstar, Singdam Kiatmoo9, Pakorn Sakyotin, Saketdao Petpayathai and Anuwat Kaewsamrit.

Most importantly he still has the hunger to compete and promised to put on an entertaining fight for the fans in Bangkok on Friday,

“I’ve still got plenty of goals, I love fighting more than anything, nothing compares to it and I just want to have as many more fights as possible and keep entertaining the fans. I’ve fought pretty much the who’s who of Muay Thai and never backed down from a fight and fought anyone who’s been put in front of me and will continue to do so.”