We have all been watching the ongoing atomweight Grand Prix but no-one has been keeping a closer eye on the competition then reigning champion Angela Lee. She knows that her next fight will be against the tournament winner and has been running the rule over the four semi finalists.

Lee believes that Stamp Fairtex and Ritu Phogat will win their semi finals at ONE: ‘NextGen’ next week,

“I think that there’s a high chance that we’ll see Stamp versus Ritu in the final. I think they’re both very good fighters. They both have their strengths and weaknesses, but it’ll be fun to see because it’s typical striker versus grappler.” Lee admits she has already been thinking about how she would go about fighting the participants in the tournament,

“I’ve been keeping a very close eye on the matchups, and whoever is advancing to the next round. I’m looking at everybody. I’m strategizing, and so anybody who comes to find me at the end of the tournament, I have a plan for them.”

But she admits that the quarter finals did not play out the way she had anticipated,

“I thought the matchups were very interesting to start off the Grand Prix. It was very exciting to see who came out on top. A lot of the underdogs ended up taking the win. And, of course, there was a lot of controversy as well.”

She was impressed by Phogat’s comeback win against Meng Bo. The Indian was nearly stopped in the opening round but was able to control the final ten minutes of the fight with takedowns,

“The durability of Ritu stood out to me. She was able to weather the storm. Meng Bo was gunning for the knockout, and she was able to take her down, control her, and come out with the win,” she said.

“It’s funny because Denice and Seo Hee Ham were both the favorites in the tournament and now moving onto the next round, they’re both eliminated. So really, it’s anyone’s game,” she said. 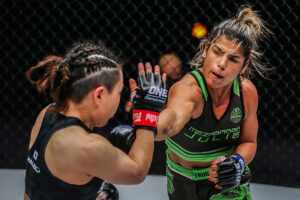 It sounds like she believes Julie Mezabarba who replaced Ham, could turn out to be the surprise package,

“With Julie stepping into the tournament now, it’s a huge plot twist, and things are going to get interesting. Especially in this next round in the tournament, nobody was expecting her to be in it, and now she is. So, let’s see how that goes.”

With the semi finals booked for next week there should be plenty of time to conclude the tournament before the end of the year. Lee will be ready to fight the winner and says she is already back in training after taking time off to give birth to her first daughter,

“As this tournament goes on, it just gets me more fired up to get back into the cage, and I can’t wait to come back.”