ARC 2 is set for Seoul on July 18th. The event is a collaboration between Road FC and AfreecaTV and has a unique format, with three minute round and stand ups after 30 seconds on the ground.

The event will take place at Hot6ix Afreeca Colosseum, an e-sports arena, inside Lotte World Tower in southern Seoul. There are currently two fights on the card, including a rematch from ARC 1.

Nandin Erdene (12-6) needed just 33 seconds to finish Kim Se Yeong (6-4) at the promotion’s inaugural event in May. But matchmakers have decided to replay the catchweight contest, which is set for 75kgs, on July 18th.

The other fight currently on the card is in the welterweight division and also features two Road FC fighters. Shin Dong Guk (3-2) has been matched with Shoiatbek Bazarbaev (0-1).

Guk is coming off a decision loss to Yui Chul Nam at Road FC 57 although he went the distance with the UFC veteran. Bazarbaev dropped a split decision to Woo Hyuk Choi in his pro debut at Road FC 55. He also had a successful amateur career with the promotion. 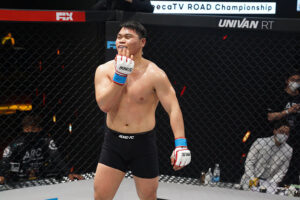