Captain Petchyindee‘s team don’t want him to fight Nong-O Gaiyanghadao. But the reigning ONE Championship bantamweight kickboxing champion is definitely up for it.

“If they were to allow it, I would want to fight him. I’ve wanted to fight him for a long time because he is one of the best fighters. If there is a chance, I would like to compete with him once to test my ability.”

“In fact, I never met him or practiced with Nong-O at the camp because I came here when he had already left the gym. So, I don’t have a senior-junior bond with him at all. If the gym allows me to fight him, I’m more than ready.”

Next up for Captain is Mehdi Zatout. The Thai defends his title at ONE: ‘Revolution’ later this month and describes his opponent as a ‘tough guy’,

“I’ve watched many of his fight videos. I think he’s a tough guy to deal with because he has experience in Muay Thai, and he’s also a good technical fighter.”

He has already beaten Zatout’s teammate Alaverdi Ramazanov but believes the Algerian French fighter will pose more of a challenge,

“They have a similar style, but I think that Mehdi is more experienced and skilled. Mehdi’s techniques, tactics, and weapons are much better than Alaverdi’s.” 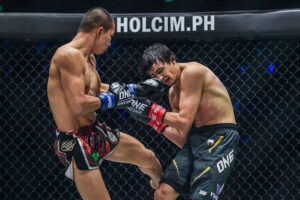 But the Thai veteran does think his opponent is capable of knocking him out if he isn’t careful,

“His strength is experience. I have to read his movements carefully and watch out for his punches, too. He has powerful and sharp punches. If I’m not careful enough, I might get knocked out.”

He does think that Zatout lacks stamina and could see the challenger fading if the fight goes the full five rounds,

“What I learned from his past fights, I noticed that he runs out of gas quickly. He always struggled at the end of the fight. He couldn’t fight for long. Maybe it’s because of his age. So, I’ll make good use of this point. I’m younger than him, so I can use my youth and strength to beat him.” No-one would come away from a Captain fight thinking that his kicks lacked power but he says he has been putting in some extra work to ensure they land with even more force than before,

“I’ve undergone a special training program to improve my kicking force. We do the training to increase the muscles of both legs, which makes my kicks more functional and powerful. And we have special equipment that can measure my kicking speed and power. Now, I see that my leg muscles are stronger, and I can kick much harder.”

A Captain with more power in his kicks is a scary proposition for any opponent. At ONE: ‘Revolution’ we will find out if Zatout is able to cope.