Nong-O: ‘my style is perfect for ‘aggressive’ Rodlek’

Nong-O Gaiyanghadao will be facing Rodlek PKSaenchaigym in the main event of ONE: ‘Collision Course’ this Friday. The reigning bantamweight Muay Thai champion has been unstoppable since moving from the stadium’s to fight on the international scene.

Nong-O has won six fights out of six for ONE Championship. The 34 year old has never previously faced Rodlek who was a Channel 7 super featherweight champion and has beaten the likes of Kulabdam SorJorPiekUThai, Seksan Or Kwanmuang, Nuenglanlek Jitmuangnon, Yodlekpetch Or Pitisak and Panpayak Sitchefboontham.

Only four years separate the two men but Nong-0 sees his opponent as being part of a new generation of Muay Thai fighters,

“I am excited to see new faces. It is different from the past where I have seen the same opponents and got familiar with their styles. I want to fight with a new fighter who has a new style,” he said. Nong-O was the Lumpinee champion in four different divisions and also won a title at Rajdamnern. He is a veteran of around 300 fights but believes he is still learning the craft,

“I improve myself by fighting with new opponents (because) I can learn new techniques from them to develop my own style.”

Nong-O has always been a clever fighter who can think on his feet. He is very good at working opponent’s out and then punishing them with his powerful right kick and this will probably be the game plan on Friday,

“In this fight, I think both of us can strike each other heavily with our powerful weapons. (It) will be about who can utilize their experience better to get the advantage, the one who is better at it will be the winner.” 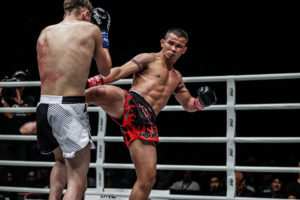 During his stadium career Nong-O was used to fighting opponents who would try to walk him down like Petchboonchu FAGroup, Yodwicha Por Boonsit and Saketdao Phetpayatai. He expects Rodlek to bring the fight to him and says he will be ready for it,

“I have experienced this aggressive style for so long. Powerful kicks and punches. I already prepared for this,” he said.

Nong-O is one of the best in the business when it comes to fighting off the back foot. He thinks Rodlek’s style will play into his hands,

“Rodlek’s style is an aggressive style. I am not afraid of that. Instead, I love it because he will be stepping forward to get kicked by me. I will use my tactics to defeat him.”

Several younger Thai fighters like Rodtang Jitmuangnon and Stamp Fairtex have become stars with the ONE Super Series. Nong-O belongs to a different generation but is still going strong and will be looking to put on another display of strength on Friday.