Zeus FC 3, the first MMA event of 2020 to take place in South Korea, commenced in Seoul at KBS Arena Hall on Saturday night. With the organization expecting to crown an inaugural bantamweight champion later this year, the night was owned by the division’s best prospects who are all vying for a shot at the strap.

One Warrior Series vet Chang Ho Lee faced off against Hwang Sung Joo in the headliner and implemented a grappling heavy attack to earn the unanimous decision.

Hwang came out of the gate looking extremely confident on the feet even though he was on the back foot for most of the first frame. Trading kicks to the body and single shots to the face was the narrative for the first few minutes.

Countering well with the straight left and defending the takedown efficiently, the MMA Story product looked to be on his way to a good night at the office. But Lee continued with forward pressure and finally got his opponent to the mat with about thirty seconds left on the clock.

In the second round, Lee kicked it up a notch and relentlessly dived for the legs to get it to the mat. Halfway through the round, Lee slammed Hwang to the ground and advanced to half guard.

From there, he peppered down punches until he connected with an illegal elbow and the referee stopped the action and started them back upright. Once again with less than a minute left, Lee pressed against the fence and completed another takedown.

Lee shot for a double after getting hit with a stiff jab and a head kick but found himself in an arm-in guillotine. With Hwang squeezing for life, Lee toughed it out and popped his head out. To close out the round, Lee executed another takedown and landed some decent ground and pound.

After getting back in the win column last October, Hwang loses again and drops his record to 2-5 overall. Lee, on the other hand, stretches his unbeaten streak to 6-0 and establishes himself as one of the rising stars in the regional scene. 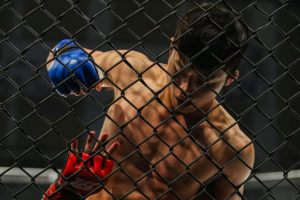 All the other bantamweight matchups ended in first-round finishes.  Lee Min Joo (5-2), who was the most impressive, easily dismantling Park Eun Seok (0-3) once the fight hit the canvas to secure a triangle choke from mount and likely line up a showdown with Lee Chang Ho.

Meanwhile Choi Han Gil (3-2) utilized crisp boxing to obtain the TKO against Yoon Jin Soo (2-4) while Hong Jong Tae (2-2) scrambled well and submitted Nam In Chul (1-4) after sitting on the sidelines for more than two years.

After a right-hand counter dropped Park, Lee flew in with a knee and connected cleanly on the jaw to drop him again. A couple more punches and the ref had seen enough to call the fight.