After suffering a devastating defeat at the start of 2019, Hayato Ishii is looking to make it two wins in a row when he returns to action at Shooto 0531 on Sunday.

He is penciled to duke it out with compatriot Tsubasa Saito in a three-round featherweight encounter. Ishii is coming off a unanimous decision win over Takahiro Ichijo this past February and wants to put himself on Rich Franklin’s radar.

“The goal is to fight in ONE Championship, and the easiest path for me to get there is through ONE Warrior Series,” Ishii said through a translator. 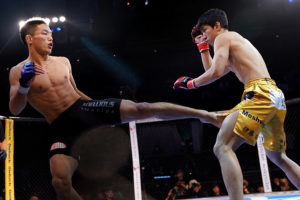 Ishii felt that a contract offer from Franklin was within his reach before the heartbreaking loss at the hands of Kenta Takizawa at Pancrase 310 last November.

Takizawa sent the crowd at the Shinkiba Studio Coast in Tokyo into a frenzy as he knocked out Ishii with a well-timed flying knee in the third round. It was voted as KO of the year at the 2019 Asian MMA Awards but was a huge setback for the 24 year old,

“The fight could have been my ticket to ONE Warrior Series, but I lost. That defeat was really painful. It was his night, not mine,” he recalled. 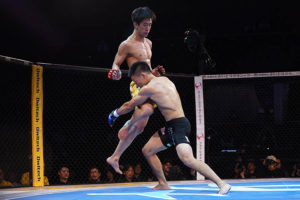 Through his coaches at Tribe Tokyo MMA, Ishii mustered the courage to pick himself up and open a new chapter in his budding professional career.

To set things in motion again, Ishii elected to return to Shooto and accepted a tune-up bout against Takahiro Ichijo in February. He went two rounds with the Brave Heart Fukushima representative, notching a clear-cut decision victory in the end.

Ishii admitted that he regained some of his swagger by beating Ichijo,

“I needed that victory because I was searching for motivation to continue. That win provided me the fuel to work hard again, so I can achieve my dream in this sport. After that fight, everything is back for me,” he stated.

The man who could rain on his parade at Shooto 0531 is Saito. He has won seven out of his last eight fights and Ishii knows that he needs to dictate the pace from the get-go,

“I have my own rhythm. I don’t care if it’s on the ground or in the stand-up. When I ride that rhythm, I create a strong and imposing impression. So from the first bell, I have to build my momentum right away to throw him off his game,” he explained.

Ishii has a clear ambition in mind and will not settle for anything less than a statement win versus Saito on Sunday,

“I have to win dominantly this time around. It’s either I win by one-sided decision or by stoppage. If I do not fight like that, I won’t be able to talk to ONE Championship or ONE Warrior Series. So that’s only my choice. It challenges me,” he ended.