After sitting on the sidelines for 16 months, Japanese grappling wizard Hayato Suzuki turned in a performance to remember in his return to active competition. The 33-year-old needed two minutes to submit compatriot Ryosuke Kano in the co-main event of Grachan 44 x Brave Fight 22 on Sunday.

It was a triumphant return to the promotion where he made his name for Suzuki. He finished the fight with a tight rear-naked choke, drawing a thunderous roar from the crowd inside the Ota City Industrial Plaza in Tokyo.

Suzuki struck quickly in round one. As soon as the bell rang, he closed the distance and launched himself through the air with a flying knee.

After some initial clinching for leverage, he then took his opponent to the canvas. Though he was caught in a guillotine choke position, Suzuki managed to escape and started applying crushing top pressure from the half-guard. 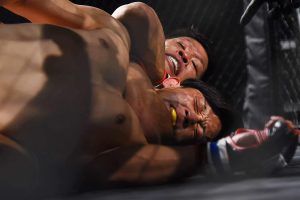 Kano was left trapped and unable to respond as Suzuki remained relentless, unloading punches and elbows to the head.

The only defense that Kano could offer against Suzuki’s overwhelming offense was to roll himself away from the barrage of blows.

But that opened up the opportunity that the former Grachan flyweight title holder was looking for as he moved to his foe’s back and immediately locked up a rear-naked choke.

Suzuki then applied the squeeze, sending Kano into sleep at the 2:00 mark of the opening round to bring his professional record to 21-1-2 and start his 2020 on a triumphant note.

On the other hand, Kano dropped to a 7-8 win-loss standing. The defeat also marked his third loss in a row, and he has not won a fight since December 2018. 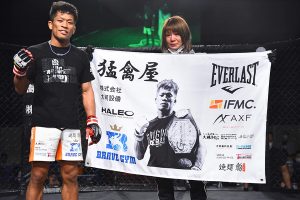 Standing at the center of the cage beside his emotional wife, Suzuki tried his best to hold back his tears while speaking on the microphone in his post-fight interview.

Suzuki was diagnosed with a cerebellar cyst that forced him to withdraw from his strawweight title rematch against Team Lakay’s Joshua Pacio at ONE: ‘Eternal Glory’ in January 2019.

After going through a series of medical examinations, he received his clearance to compete again, opting to start over again in Grachan, where most of his matches in his career took place.

“I am just so happy right now,” Suzuki said in his native tongue after this fight.

Suzuki confirmed that he is no longer under contract with ONE Championship and called out UFC veteran Jarred Brooks for a Rizin showdown,