Jackie Buntan says the momentum is with her

Jackie Buntan got her ONE Championship career off to a perfect start when she beat Wondergirl Fairtex on her promotional debut.

The Fil-Am fighter came into the bout as an underdog but stunned everyone by dropping Wondergirl with a fast left hook counter at ONE: ‘Fists of Fury’ in February. She went on to dominate the fight, taking a clear cut decision win.

Buntan was very happy with the outcome and revealed that her and her coach at Boxing Work, Bryan Popejoy, had been working hard on that shot having previously identified some weaknesses in her opponent’s game,

“I was very pleased with my fight against wonder girl. Coming off a one and a half year year hiatus, I took that time to improve as a fighter and I really believe it all came out and showed in the fight. Bryan had the game plan to work that over hand right to left hook countless times. He saw from her previous fights that she would be open for it so we drilled it countless times until it practically felt like muscle memory.” 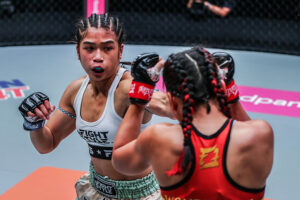 This week she faces Ekaterina Vandaryeva of Belarus in a strawweight Muay Thai fight at ONE on TNT Part IV. Buntan feels she will benefit from the fast turnaround,

“A day after my fight with Wondergirl, ONE Championship notified me telling me they want me back on their April TNT card. So I knew about the potential for this matchup for quite some time, but having such a quick turnaround, it wasn’t like we’re starting off a break from competition so it’s nice having the momentum.”

Vandaryeva comes with a solid pedigree having beating former UFC Champion Joanna Jędrzejczyk, under kickboxing rules, back in 2011 and is a two times IFMA gold medalist. Buntan and her team have already seen her up close as she fought hear training partner Janet Todd at ONE: ‘Century’,

“I don’t like to watch too much of my opponents fights, probably a couple rounds just to get an idea. I know she has a height and reach advantage and she also likes to throw her overhand right and she has a good left kick. I think she likes to kind of stay stagnant and sometimes wait for you to rush in, where she can use her reach advantage. I wasn’t with Janet in Tokyo when they both fought but I’ve seen their fight multiple times.” 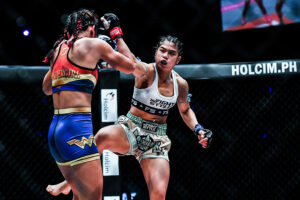 Having already travelled to Singapore once to compete during the Covid-19 era Buntan knows exactly what to expect second time around and sounds very calm,

“Fighting on such a huge show like ONE championship during a pandemic was definitely something I’m very grateful to do. The regulations ONE had in place, keeping quarantined in the hotel the whole trip, was very different and something I wasn’t used to, but I could not complain at all, they ran the whole thing so smoothly, I really had no stress on my end as a fighter and I can’t wait to do it again.”

ONE Championship hasn’t introduced strawweight Muay Thai rankings for the female fighters yet. But sooner or later a champion will be be crowned and Buntan can put herself in pole position for a shot at the belt with a win this week.