Wondergirl wants to transition to MMA

Wondergirl Fairtex will be looking to make it a hat trick of wins when she faces Jackie Buntan on ONE: ‘Fists of Fury’ this week. The Thai fighter scored back to back victories for the promotion in 2020.

She knocked out Australian fighter Brooke Farrell in the opening round on ONE: ‘No Surrender’ Part III and followed that up with a second round stoppage win over KC Carlos of the Philippines at ONE: ‘A New Breed’. Wondergirl says it was the perfect start but she feels there is more to come,

“Those two fights were fantastic for me, it was good to get two KO wins and a great start, but I want more wins, more victory and more KO’s.” 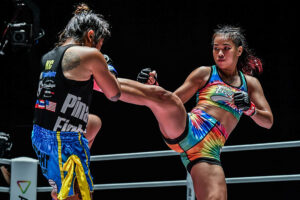 Buntan trains alongside atomweight ONE Championship kickboxing title holder Janet Todd. Wondergirl will be the taller of the two fighters and sounds very confident,

“I have seen Jackie fight and watched her since I saw some of her training videos with Janet Todd. She’s pretty good, I like her style, she’s a strong technical fighter. She is shorter than me though and I will be looking to use my reach and range to get an advantage in this fight. I am confident I will get the win again and I’m sure this fight will be fire!”

Wondegirl recently received her blue belt in BJJ from DJ Jackson who is the MMA coach at the Fairtex Gym. She is very interested in switching over the sport in future,

“That is the reason I came here to Fairtex. At first I just wanted to train and fight MMA, but ONE gave me the opportunity to fight Muay Thai first. I heard they want to maybe move me like Stamp and work towards a title in Muay Thai first (and) I want to prove myself in this sport and show I am the best and then transition into MMA.” 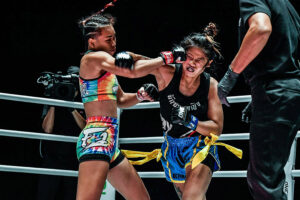 There are no rankings for the female strawweight Muay Thai and kickboxing fighters. But three wins out of three would clearly leave Wondergirl in pole position for a title shot.

MMA stardom surely awaits but in the meantime Wondergirl says she is happy to face whoever ONE Championship put in front of her,