Another lightweight bout has been added to the AFC 16 card. Jang Baek Ho faces Joo Sang Yoo in Seoul on May 31st.

Ho (1-0) made his pro debut at Zeus FC 5 last November. He needed just 46 seconds to finish Do Yeon Kim and will be looking for his second straight win here.

Yoo will be making his pro debut after enjoying success in the amateur ranks. He won three fights out of three but has not tasted competitive action since 2018.

Also added to the card this week was a bantamweight bout. Bum Jun Cha (0-2-1) has been matched with Jin Min Kim (1-6), the former is best known for having faced Tenshin Nasukawa in a kickboxing contest in 2014.

Touted lightweight prospect Jae Wook Myung will also be on the card. He will be looking to bounce back from the first loss of his entire career when he faces Jae Hyun Park

In the welterweight division Lee Song Ha will take on Kim Sang Wook. The latter suffered his first loss as a professional at AFC 14 after back to back stoppage wins at Zeus FC 3 and Zeus FC 4 while the former will be making his professional debut. 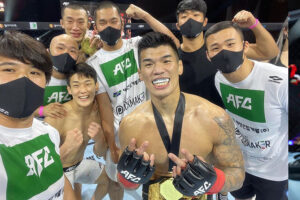