A welterweight bout has been added to the AFC 16 card. Lee Song Ha will take on Kim Sang Wook in Seoul on May 31st.

Wook (2-1) suffered his first loss as a professional at AFC 14 but it came at the hands of one of Korea’s top lightweight prospects Ho Taek Oh. Before that he had enjoyed back to back stoppage wins at Zeus FC 3 and Zeus FC 4.

Ha will be making his professional debut. He fought six times for Road FC’s amateur league, winning four of this bouts but has been out of action since 2018.

Ko comes from a sambo background and is on a four fight winning streak. The only loss of his entire career came at the hands of Sasha Palatnikov in 2018.

By contrast Ahn has lost his last three fights. He dropped decisions to Kyung Jun Ahn at AFC 11 and Palatnikov at AFC 10. 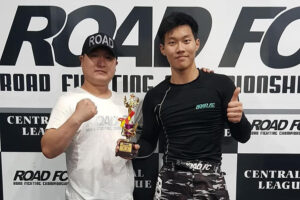