It was not a good night for the Koreans at UFC Vegas 41. Seung Woo Choi and Jun Yong Park were both stopped in the second round at the Apex Centre last night.

While Park may have endured the first TKO loss of his career the middleweight at least he went home with a $50,000 USD bonus for his part in an epic brawl with Gregory Rodrigues. The Korean came into the fight on the back of a three-fight winning streak and arrived very much game for a brawl.

‘The Iron Turtle’ landed with some lead leg kicks and clean jabs in the opening exchanges. Rodrigues won his UFC debut via majority decision in May, and the Brazilian soon began cracking with a savage left-right combo.

Heavy exchanges in the first! ????

Rodrigues followed up with some strong work to the body, using the jab to set up the right hand before sweeping the standing leg and eventually taking the back. ‘Robocop’ was unable to find the submission and Park responded by coming out swinging early in the second stanza.

The 30-year-old caught Rodrigues with a potent right hand and had him backed up against the cage as he began to let his hands go. Under pressure the Brazilian shot for a takedown, but Park sprawled well and went for a guillotine.

Rodriguez scrambled and transitioned to take his opponents back once more. Park found his feet and went back to work with his hands as he landed a barrage of big shots.

Rodrigues wrapped him up and produced a beautiful judo takedown. When the pair found their feet again it was back to trading monster blows as both fighters landed powerful right hands.

Park then appeared to have the upper hand. With Rodrigues’s defenses down, the Seoul man was teeing off on him and was probably just one more crucial shot away from ending the fight.

But Rodrigues clapped back with hammer of a cross. He followed up with two more that sent Park stumbling backwards. Then came a brutal uppercut with the right hand as Park’s legs buckled and the referee called a stop to the contest at 3:31.

That empathic win takes Rodrigues’s record to 11-3. Park slips to 13-5. It was a real slugfest in the end and well-deserving of fight of the night.

Choi made a strong start to his featherweight fight with Alex Caceres. ‘Sting’ quickly found a home for his right hand and dropped the American in the early exchanges but made the disastrous decision to go for a knee to the head of his grounded opponent.

The knee found its mark and Caceres looked seriously hurt. Choi was immediately deducted a point and would have been relieved when the American signaled he was able to continue.

WILD MOMENTS IN THIS ONE!

Choi loses a point but the fight will continue #UFCVegas41 pic.twitter.com/B0EuoDv2KL

The opening round was all Choi’s as he continued to find a home for the right hand and he would have gone into the second stanza feeling confident despite the point deduction. He switched strategy and looked to finish the fight with head kicks which failed to connect.

Both men looked tired but Choi was finding Caceres a much more elusive target than he had in the first round. The ending came quickly and was totally unexpected.

With the action having slowed Caceres suddenly spotted an opportunity to grab hold of Choi’s back. From there he wasted no time in locking in a rear naked choke with the tap coming at the 3:13 mark. 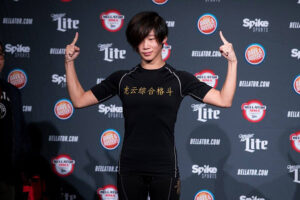