Kleber Koike was hoping to be handed a title shot after submitting Mikuru Asakura at Rizin 28. But the Brazilian will have to bide his time and has been handed a tricky looking tune up bout instead.

At Rizin Trigger 2 he faces Ulka Sasaki. His opponent fought nine times for the UFC and has fought five times for Rizin but Koike does not sound particularly impressed,

“I respect my opponent as a fighter and all of his accomplishments but I don’t feel any threat from him in my division.”

After ten years competing at 135lbs Sasaki decided to move up a division last year. He didn’t get off to a very good start and was outpointed by fellow UFC veteran Yoshinori Horie at Rizin 30 last September. 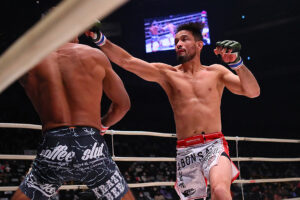 Asakura does not think that Sasaki has what it takes to be a success in the featherweight division,

“He was an okay bantamweight but just lost in his featherweight debut. I will beat him with ease.”

Reigning Rizin featherweight champion Juntaro Ushiku also holds the Deep 145lbs title and successfully defended that last month. It means he has a busy schedule and it is not clear when he will be making the the first defence of his Rizin belt.

In the meantime Kleber will have to settle for taking on the other contenders but he does not expect to be unduly troubled by Sasaki at Rizin Trigger 2.